Richard III and his royal progress in York

It is not that easy to find a city connected to King Richard III as York is. During his life, he visited the capital of Yorkshire many times and after he accepted the crown and became king, he left London for the Royal progress and stayed in York for three weeks.

We are lucky enough to have records of his staying in the city and of his triumphant arrival on 29th August 1483 in the capital of Yorkshire. The description of this event is not very detailed abut gives us the perfect idea of what happened that day in York.

It is significant that Richard entered York through Micklegate Bar.

He probably decided to do so in 1460 his father’s head had been displayed there as he was declared a traitor. Richard Duke of York was actually eligible to be King himself so we can consider Richard’s choice as a remark that both him and his father were legitimate heirs to the throne. We can also imagine that he wanted to redeem his father entering in triumph from the same gate his father had been so badly humiliated and treated as a traitor.

We have an account of the royal progress in York thanks to the Extracts from the Municipal Records of the City of York. I adapted from the medieval version to the modern to be more understandable.

“He took his journey towards the county of York where the people abused his lawful favour (as he both favoured and trusted them in his heart) had of late presumed to attempt diverse routes and riots contrary to his laws and enfranging of his peace and upon hope of his maintenance were so elated that no lord were he never of so great power could either pacify or rule them till the King himself came personally thether to set a concorde and a unity in that country and to bridel and rule the rude and rustical and blustering bold people of that region and so he by long journeying came to the city of York were the citizens received him with great pomp and triumph according to the qualities of their education and quantity of their substance and abiity and make diverse days, plays and pageantry and token joy and solace.

York Minster: Wherefore King Richard magnified and applauded by the north nation and also to show himself appearing before them in royal habit and sceptre in laude and diadem on his head, made proclamation that all people should resort to York, on the day of ascension of our Lord, where all men should both behold and see him, his queen and prince in their high estates and degrees, and also for their good will, should receive many thanks, large benefits and munificent rewards. At the day appointed, the whole clergy assembled in copes richly revested and so with a reverent ceremony went about the city in procession; after whom followed the king with his crown and sceptre, appeared in his circot robe royal accompanied with no small number of the nobility of his realm: after whom marched in order queen Anne his wife, likewise crowned leading on her left hand prince Edward her son having on his head a demi crown appointed for the degree of a prince.  The king was held in that triumph in such honour and the common people of the North  so rejoyed that they extolled and praised him far above the stars.”

The Archbishop’s Palace in York

On the 8th September, Richard invested his son Edward Prince of Wales and made knight his illegitimate son (John of Gloucester) in the Archbishop’s Palace in York. He also gave to York many presents especially to the Minster. There is an inventory of all the beautiful items he donated to the Minster of York. None of these seems to have survived. 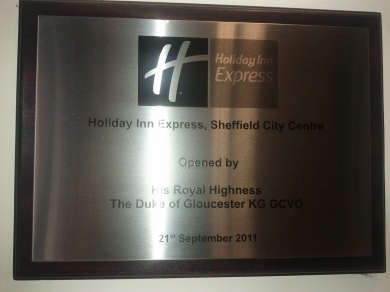 The Hotel opened by the present Duke of Gloucester

Richard entered the city of York as a King on 29th August. For an incredible coincidence, the day I officially landed in England to remain was 29th August as well. We stayed for 25 days in a hotel in the city centre that had been opened by HRH Richard Duke of Gloucester.  A sign of my future affiliation to the RIII Society?