A narrow escape from Richard III….

Ambling around the internet, I came upon the following. This passage is from The Sporting Review, ed. by ‘Craven’, edited by John William Carleton and contains a delightful description of what it was like for early tourists to sail down the River Tamar and visit the sights along the way. I have taken this particular passage because of the anecdote/legend that appears at the end, concerning Sir Richard Edgecumbe/Edgcumbe.

“. . . .The Tamar now becomes most interesting, winding along like a gigantic snake, every turn bringing some picturesque village or ancient mansion in sight; the lofty hills on either side covered with foliage, amidst which we saw the gothic pinnacles of Pentillie Castle. Every minute brings some fresh object of beauty, until we reach the noble woods of Cothele: here we landed at the Lime-kilns, and soon found a shaky nook, where we partook of our luncheon; then with renewed strength we set off on foot for Cothele House.

“Its embattled walls and massive arched doorways give it the appearance of a feudal castle. It was built by Sir Richard Edgcumbe in the early part of the reign of Henry Vii. The Earl of Mount Edgecumbe, to whom it now belongs, most kindly allows visitors to see the interior, with its antique furniture that has remained untouched for centuries.

“We entered under a massive arched-doorway, and found ourselves in a large court surrounded by buildings; from this we passed into the hall, where we felt as if we had left these modern times, and been carried back to the days of feudalism. The walls are hung with every kind of ancient arms—coats of mail, shields, helmets, gauntlets, arquebuses, bows and arrows, spears, swords, etc. At the upper end of the hall is the figure of a warrior armed cap-à-pie.

“We next visited the dining-room, hung with tapestry. Well could we picture the good old hospitality of those bygone times, when the table groaned beneath barons of beef and haunches of venison, and in the huge open hearth blazed piles of wood, while tankards of Burgundy and loyal toasts passed around. Alas! For these degenerate days of dinners à la Russe, and thin French wines, which cool instead of warm the heart of man.

“The chapel inspected, we ascended the broad oak staircase, which polished floor rendered the ascent rather perilous; on the walls were portraits of many of the ancestors of the Edgecumbes, but time has nearly obliterated their features. We were shown the room where Charles II. Passed several nights. Nearly all the rooms are hung with tapestry.

“After spending some time in visiting all the nooks and corners of this interesting olf house, we bid it adieu, and passed down an avenue of chestnuts to the river’s bank, where stands a gothic chapel almost concealed in the thick woods by which it is surrounded; it was built by Sir Richard Edgecumbe, who was comptroller of the household of Henry VII. There is an inscription on the walls from Carew’s Survey, which explains the reason for its erection. 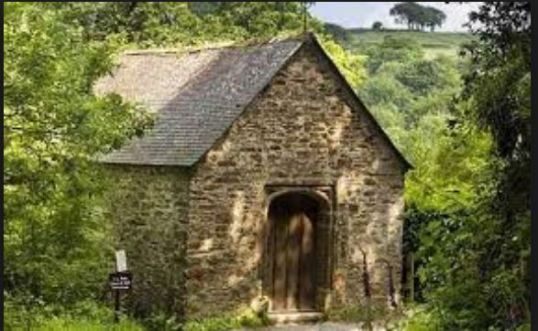 “ ‘Sir Richard Edgcumbe was driven to hide himself in those thick woods which overlook the river, at that time being suspected of favouring the Earl of Richmond’s party against King Richard III. He was hotly pursued and narrowly searched for, which extremity taught him a sudden policy—to put a stone in his cap and tumble same into the water, while these rangers were fast on his heels; who looking down after the noise, and seeing his cap swimming thereon, supposed that he had desperately drowned himself, gave over their further hunting, and left him liberty to shift away and ship over into Brittaine, for a grateful remembrance of which delivery he afterwards builded in the place of his lurking a chapel.’ ”

2 thoughts on “A narrow escape from Richard III….”