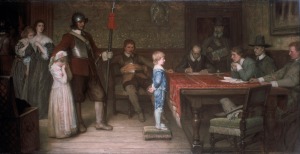 This famous painting, which hangs in the Walker Art Gallery in Liverpool, is so well known that it barely requires introduction.

It should be noted though that, contrary to some analysis, the fact that the children are wearing colourful clothing does not of itself make them “Royalist”.

Parliamentarians often wore colourful clothing too, and many of them wore their hair long – not cropped. Equally, supporters of the King often appear in portraits wearing black. Black happened to be fashionable, and it was also an expensive dye. So a suit of black implied your wealth, especially if cut from fine cloth. The mother of the children, standing in background, is wearing black.

Clothing was, in fact, more a matter of class distinction than political.

At the Battle of Marston Moor, one of the Parliamentary generals, Sir Thomas Fairfax (not this Royal ancestor), passed through the Royalist lines by the simple expedient of removing his “field sign” – without which he was indistinguishable from a Royalist officer.

It should be explained that up until the creation of the New Model Army (which wore red) regiments were clothed in whatever colours their colonel chose, so you could have regiments wearing (say) blue on both sides of a battle. Officers naturally wore their own clothes and equipment – nothing so lowly as uniform for them! Hence the “field sign”. This was usually improvised on the day. It could be something as simple as a sprig of barley worn in the hat, depending, of course, on what was available.