Shortly before Richard III’s remains were discovered, another ancient member of the English royalty was  found–the Saxon Princess Eadgyth who became Queen of Germany in 930 through her marriage to King Otto. Her father was Edward the Elder and so she was Alfred the Great’s granddaughter. She died at around 30 and was buried at the monastery of St Maurice, but in the 16th c her tomb was moved to Magdeburg Cathedral. Long thought to be empty, it turned out there was an ossuary chest within that had her name on it. The bones within the chest were removed for examination.

Carbon dates showed that the remains from Magdeburg were in the right era to be Eadgyth but more information was needed to confirm a probable identification as Eadgyth. So isotope analysis was done on the tooth enamel, confirming that the person in question had grown up on the chalklands of Wessex in their youth. This was enough to say in all probability, the fragmented skeleton was that of Eadgyth.

The Bones of Princes Eadgyth

Below: statue of Eadgyth, Queen of Germany, granddaughter of ALFRED THE GREAT. 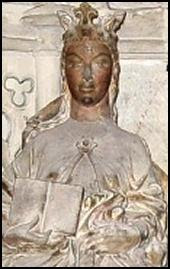