THE DEATH OF HENRY VII 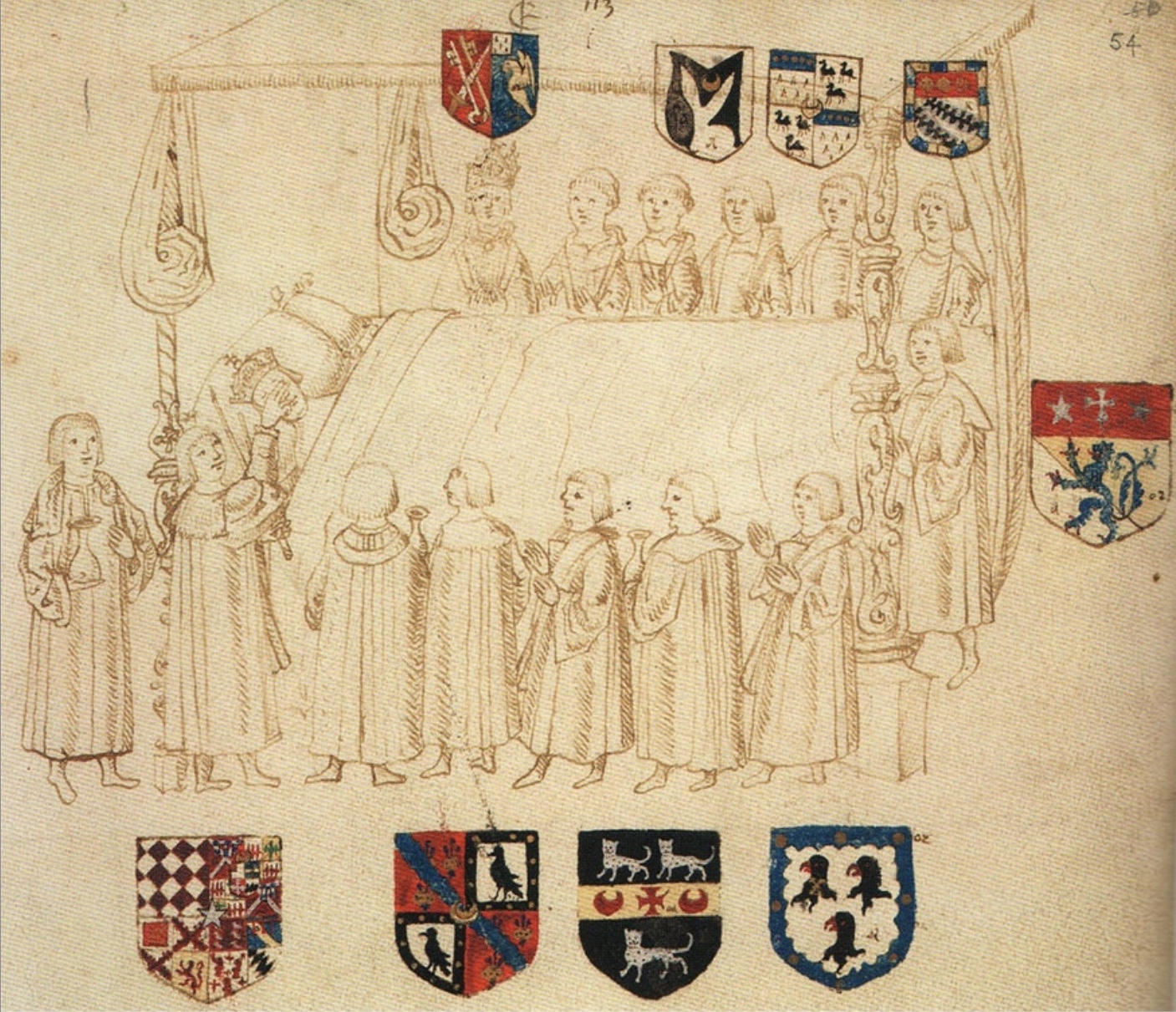 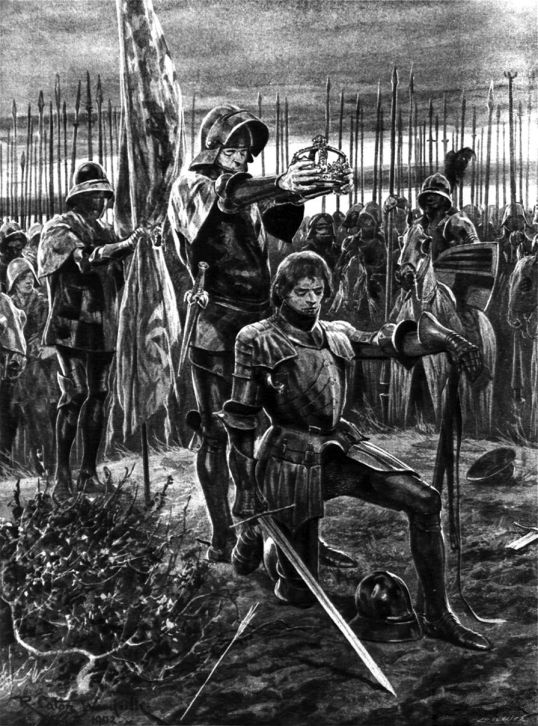 Unknown artist’s impression of Tudor being crowned in the aftermath of Bosworth..

It must have seemed surreal to him as he wandered through the dead kings apartments at Westminster that had now, overnight, become his. 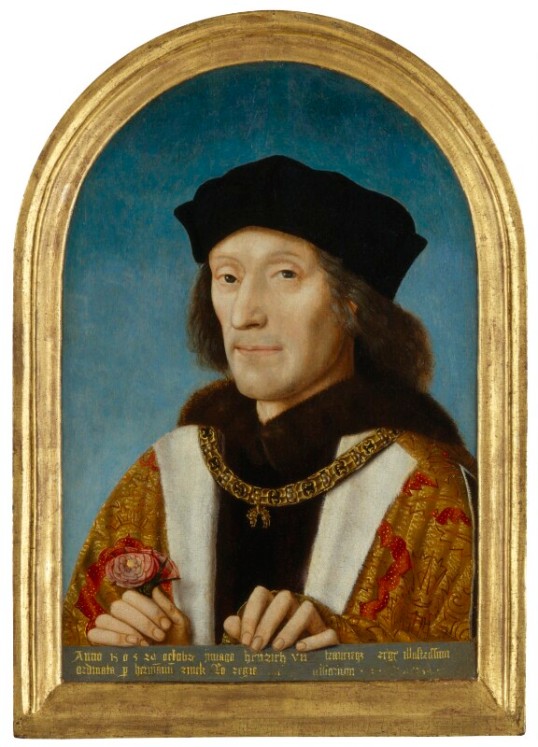 He had some worrying times with bothersome pretenders to the throne popping up with annoying regularity as well as various uprisings. Whether he was plagued by his conscience we do not  know although Margaret was prone to bursts of weeping at times when she should have been happy which must have been very tedious  for those around her.

However moving on from that , what actually did see Henry off?     His health seems to have gone into a decline when he reached his 30s.   His eyes began to trouble him and he tried various eye lotions and eye  baths  made of fennel water,  rosewater and celandine ” to make bright the sight” but to no avail ..his teeth were a source of trouble with Polydore Vergil describing him as having ‘teeth few, poor and blackish’ (1).  His eye problems must have caused him dismay as he like nothing more than to pour over his account books to see where the pennies were going and how much he was amassing. He was predeceased by his wife, whom it is said he was fond of, and four children including his oldest son and  heir,  Arthur,  but fortunately for him,  if not the country and the Roman Catholic Church he had a surviving spare. 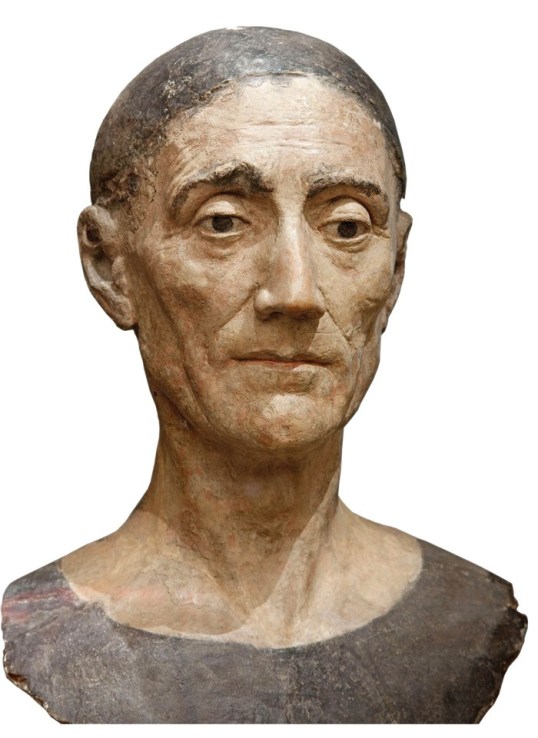 In his interesting book, The Death of Kings, Clifford Brewer writes   “Henry had developed a chronic cough which was particularly severe in springtime.  The  condition became progressively more severe and associated with loss of weight and a general wasting . In 1507 and 1508  Henry’s spring cough become more troublesome.  He  is described as having become troubled with a tissic,  or cough,  he also suffered from mild gout.  In his Life of Henry the VII , Bacon writes ‘ in the two and 20th year of his reign in 1507 he began to be troubled with a gout but the defluxation  taking also unto his breast wasted his lungs so that thrice in a year in a kind of return and especially in the spring he had great fits and labours of the tissick’.   This suggests that Henry suffered from chronic fibroid phthisis ( chronic tuberculosis infection)  which became more and more active with  resultant wasting and debility.  This  is found in several of the members of the Tudor line…Henry made a great effort to attend divine service on Easter Day 1509 but he was exhausted and retired to his palace at Richmond where he died on 21 April  from chronic pulmonary tuberculosis (2)”

According to Holinshed Chronicle “….he was so wasted with his long malady that nature could no longer  sustain his life and so he departed out of this world the two and 20th of April’.

Thomas Penn in his biography of Henry, The Winter King, describes Henry as ‘unable to eat and struggling for breath,  Henry’s mind was fixated on the hereafter …on Easter Sunday 8th April,  emaciated and in intense pain he staggered into his privy closet, where he dropped to his knees and crawled  to receive the sacrament… later as Henry lay amid mounds of pillows,  cushions and bolsters,  throat rattling,  gasping for breath,  he mumbled again and again that  ‘ if it please God to send him life they should find him a very changed man’.  Henry  made an exemplary  death,  eyes fixed intensely on the crucifix held out before him,  lifting his head up feebly  towards it,  reaching out and enfolding in his thin arms,  kissing it fervently,  beating it repeatedly upon his chest.   Fisher said that Henry’s promises took a very specific form.  If he lived, Henry promised a true reformation of all them that were officers and ministers of his laws (3)’.  However,  as they say , man makes plans and the gods laugh and Henry did not survive to bring about the changes he  was so eager on his death bed to make.  He had left it too late.

And so Henry Tudor shuffled off this mortal coil..the King is dead, long live the King..and so begun the reign of his son..Henry VIII..and that dear reader is another story.

10 thoughts on “THE DEATH OF HENRY VII”