Sixty-four bottoms sitting in a row….? 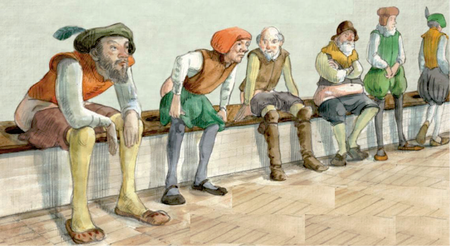 An article that is further to this …

Yes, the illustration above is funny (from our fastidious modern viewpoint) but it is also accurate for toilet facilities from early medieval times, right up into the 20th century. I am now in my seventies, and can remember in my country childhood finding outhouses/privies with up to four ‘facilities’, and yes, the holes were in a row in a single wooden plank. So, to me, the thought that in earlier times there were even more in a row is quite obvious. It seems that Richard ‘Dick’ Whittington provided one that could seat 64 bottoms at a time! Wow, that’s a lot of…well, cheeks. The difference is, however, that those small affairs that I came across always had paper – usually newspaper ripped/cut up and sewn into a convenient bunch. And, later, rolls of that awful Bronco stuff that was shiny and didn’t absorb anything! The newspaper was infinitely better. http://broughttolife.sciencemuseum.org.uk/broughttolife/objects/display?id=1790

Anyway, the illustration doesn’t show any provision at all for the wiping of bottoms. How did they manage? Just do their business and then walk away? Hmm, the consequences of that don’t bear thinking about. Our fastidious modern selves would have the vapours. Erm, in a manner of speaking.

Then, of course, those fragrant facilities had to be emptied – as described by Tony Robinson in his Worst Jobs in History series. Sometimes it wasn’t necessary, for example in the public loos overhanging the Thames, which carried their ‘business’ downstream…and then upstream again, and then downstream again, and so on, as the tides chose. So what was convenient and reasonably hygienic at the place of origin, soon became a much greater problem courtesy of the Thames. It continued until a sewage system was built in the 19th century. At huge expense. https://en.wikipedia.org/wiki/London_sewerage_system Then, eventually, the Thames ceased to stink, and the need for delightful little scented posies/nosegays was no longer necessary in Parliament. Well, not to fend off the stench from the Thames…the garbage issuing from some speechifying was another matter.

The following is from http://queryblog.tudorhistory.org/2013/10/question-from-george-toilet-facilities.html:

“While the lower courtiers had to use the malodorous communal facilities of the Great House of Easement [at Hampton Court] when they answered a call of nature, Henry VIII had the use of a specially designed box tucked away in a private room off the state bedchamber. This ‘close-stool’ was lavishly covered in black velvet and its lid opened to reveal a padded and beribboned interior covered in the same material. It had a hole in the centre with a pewter bowl placed underneath….it was a privilege to be the Groom of the Stool with the duty of attending the King when he relieved himself, and the position often went to a high-ranking courtier.”

“In 1539, one groom recorded how Henry VIII had taken laxative pills and an enema, sleeping until 2am ‘when His Grace rose to go upon his stool which, with the working of the pills and the enema, His Highness had taken before, had a very fair siege’.”

Ew. Too much information….

PS: Since writing the above, I have come across further information about the, um, toilet habits of our ancestors. Specifically, the Romans. It seems the old sponge-soaked-in-vinegar-and-stuck-on-a-stick tale might not be the whole story! https://www.bbc.co.uk/news/uk-england-21204228?fbclid=IwAR26yFjrjUgnKqGvwmQMtkk5fYc4pXIKHB5pvvY8x1YM969iKV0sOJMhuC8

One thought on “Sixty-four bottoms sitting in a row….?”