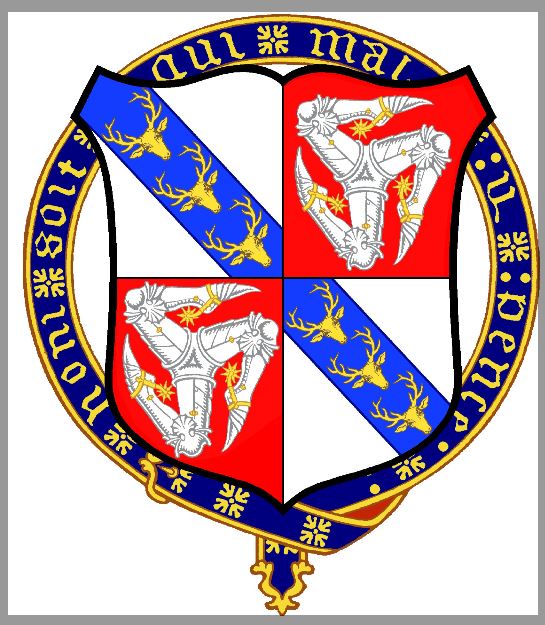 While researching fourteenth-century Northamptonshire, I happened upon Sir John Stanley (1350-1414). “Stanley’s father was Master-Forester of the Forest of Wirral, notorious for his repressive activities. Both Stanley and his older brother, William (who succeeded their father as Master-Forester), were involved in criminal cases which charged them with a forced entry in 1369 and in the murder of Thomas Clotton in 1376.” Nice guys, right?

Stanley was found guilty, and outlawed. But because he was proving himself as a military fighter, he was pardoned—helped in this by Sir Thomas Trivet, who had a habit of getting scoundrels off the hook. He did the same for Sir John Cornwall, Senior, who was definitely a bad lot, but that’s another story.

Well, although Sir John Stanley was a younger son, in 1385 he made a very fortunate marriage. In the teeth of strong opposition from John of Gaunt, he wed Isabel Lathom, who was heir to swathes of land in Lancashire. Stanley was on the up!

He did well under Richard II, becoming the deputy in Ireland of Robert de Vere, Duke of Ireland. Richard II chose Stanley as justiciar of Ireland, and he was very much part of Richard’s successful first expedition to that land. Next, Stanley was prominent in soothing trouble in Cheshire, and took part in Richard’s second, ill-advised expedition to Ireland. This expedition came to an abrupt end when Henry of Bolingbroke, Gaunt’s heir as Duke of Lancaster, who had been exiled by Richard, invaded England to take the throne as Henry IV. Returning to England, “Stanley, who had long proved adept at political manoeuvring, turned his back on Richard and submitted to Henry IV.” Richard was imprisoned and soon died under mysterious circumstances.

So, the Stanleys were at it in 1399/1400 as well. Political jiggery-pokery, deserting their rightful King Richard, and smarming up to the wrongful King Henry. But this one did well, becoming King of Man, a privilege he and his descendants enjoyed until the 18th century.

http://www.cheshirenow.co.uk/stanley_family.html and http://www.isle-of-man.com/manxnotebook/people/lords/stanleys.htm. And see this list of offices held by Sir John Stanley.