We do not suffer a great many earthquakes in the United Kingdom, but there have been some, occasionally quite considerable. Our main sphere of interest on this site is the time of Richard III, and while I was investigating another earthquake, from the previous century, I happened up information about an earthquake of 1480:- “. . .’A very great earthquake’, says Reverend Francis Blomefield, in his topographical History of the County of Norfolk, of an upheaval on December 28th, which affected most of England and threw down buildings in Norwich and elsewhere. . .”

What a tantalizing reference, but unfortunately, there is no further information in the book in which I found it – The Great English Earthquake by Peter Haining (which deals mostly with the major earthquake in 1884). As far as I recall, at this time Richard had returned to Sheriff Hutton after the Scottish campaign, so maybe he did not experience this earthquake personally. But he would have heard about it.

A king of the previous century, Richard II, would almost certainly have experienced the earthquake of 21st May, 1382, which has been described as ‘one of the strongest of all British earthquakes’. Holinshed gives the time as about 1 pm. “. . .‘An earthquake in England, that the lyke thereof was never seen in Englande before that daye nor sen.’ (R. Fabyan). . .” Another report says “. . .‘A great earthquake in England. . .fearing the hearts of many, but in Kent it was most vehement, where it suncke some Churches, and threw them down to the earth.’. . .”

Holinshed further reports that there was a second disturbance on 24th May. “. . .Earlie in the morning, chanced another earthquake, or (as some write) a watershake, being so vehement and violent a motion, that it made the ships in the havens to beat one against thye other, by reason whereof they were sore bruised by such knocking together. . .”

“. . .On the day of the first shock, John Wycliffe was being tried at Westminster for his opinions on the Bible, and the sudden shock caused the court to break up in alarm: thereafter the assembly was known as the ‘Council of the Earthquake’!. . .” The Church, of course, pronounced that the earthquake was God’s condemnation of Wycliffe. 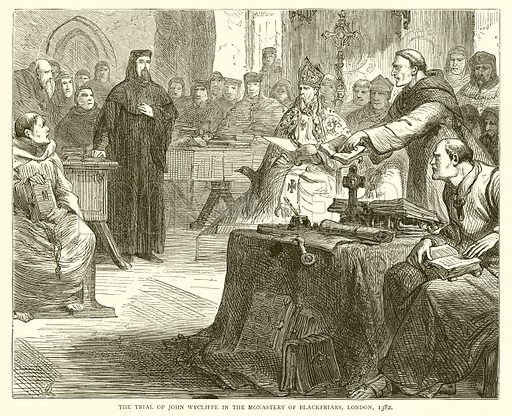 Another source tells that it was a 5.8 earthquake (I’m not sure how this can be stated as a fact) and the bell tower of Canterbury Cathedral was ‘severely damaged’. The six bells ‘shook down’.

Anyway, according to Nigel Saul, Richard II was in Westminster during this period, so I guess he certainly felt the cataclysm!

In my life I have only once experienced an earthquake. It was some time ago, and (I think) was centred off the coast of North Wales. My husband and I were in bed. It was morning, and we had yet to get up. The bed suddenly swayed backward and forward in a most peculiar manner.

My husband looked at me. “Did the earth just move for you?”

He grinned. “I’m a marvel. I didn’t even have to touch you!”