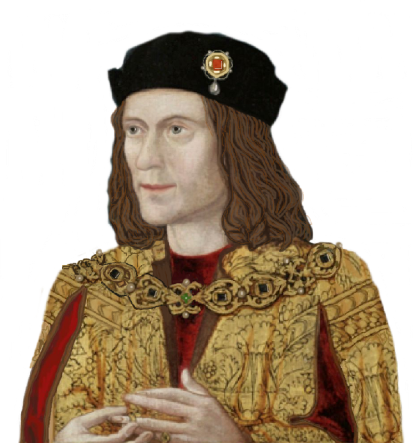 I know I have (more than once!) written of a strange string of coincidences connecting Richards II and III and their queens, both named Anne. Now I have come upon another question that puzzles me. It is well known that Richard II loved his Anne deeply, and was distraught when she died suddenly in the summer of 1394. He and his court were plunged into mourning, he had Sheen palace razed to the ground because he could not bear to go where he and she had been so happy, etc. etc.

One way Richard chose to distract himself was an expedition to Ireland, where trouble was brewing for English rule. No English monarch had been there since King John (when he was still a prince). Richard II took a huge army over, and believed himself successful in reasserting English power, as witness the illustration below, of him received homage/knighting Irish kings. At Christmas 1394, barely six months after Anne’s death, historians tells us that Richard had a whale of a time with entertainments, revels and all the usual celebrations of the period.

Now, does this sound like a monarch and court in full mourning for a beloved consort? No. Was Richard II, who was a very emotional man, able to set his grief aside and order revels, both for the season and the “victory” over the troublesome Irish kings? [It wasn’t to be long after Richard’s return to England that those kings started stirring again – well, I would have too!] Or have these junketings been overstated or even falsely reported?

Whatever, it was Christmas, and we have a King Richard, sunk in grief for his Queen Anne. I now find myself wondering what might have happened if Bosworth had gone the other way, and Richard III were still king at Christmas 1485. He was another king in deep mourning, having lost his Anne in March that same year (and his son the year before). He too would have had something to celebrate – defeating Tudor, and enjoying the Christmas season. Even if negotiations were in full swing for his remarriage, would he have thrown mourning for Anne to the winds and had a lavish old time of it? Perhaps he would think his court and the realm at large was in need of a happy time at last, and so he would set his own feelings aside? Maybe that’s what Richard II had thought before him?

I’m genuinely curious about this business of kings in mourning, because Richard II made it clear he adored Anne of Bohemia, and as far as we are concerned, Richard III and Anne Neville loved each other too. Their shared agony on the sudden death of their only child, Edward of Middleham, suggests a great closeness, if nothing else. Maybe both marriages were first entered into for political reasons. Anne of Bohemia brought nothing to her marriage, except her family and connections; Anne Neville brought half the Warwick inheritance, which was nothing to sniff at. I believe that both marriages became love matches, and that whether the kings liked it or not, they were obliged to marry again as soon as possible.

Just over a year following Christmas 1394, Richard II married the six-year-old Isabella of Valois, daughter of the King of France. One theory for this odd choice of bride—by a childless king who was beset by uncles and cousins hungry to succeed him—is that it was a way of staying faithful to Anne for longer. Such a very young second wife would not be expected to be available for consummation before she was, at the very least, twelve.

It was still 1485 when Richard III’s envoys commenced negotiations for him to marry Joanna of Portugal, who is known to posterity as the Blessed Joanna, Princess of Portugal. She was eight months older than Richard, and in the end did not marry anyone. These 1485 negotiations were not only for Richard’s marriage, but for that of his eldest niece, Elizabeth of York, who was to marry Joanna’s cousin, who would become Manuel I.  This sounds a workmanlike arrangement, made because, as I have said, a childless king had to marry again, quickly. At least Richard III’s chosen bride would be able to provide him with heirs, unlike little Isabella of France. And he was arranging a very good marriage for his illegitimate niece.

The Blessed Joanna, Princess of Portugal

So, just what was the protocol for this sort of thing? Did mourning mean just that, mourning? Nothing less. Or could it be dipped into and out of, as the situation dictated? 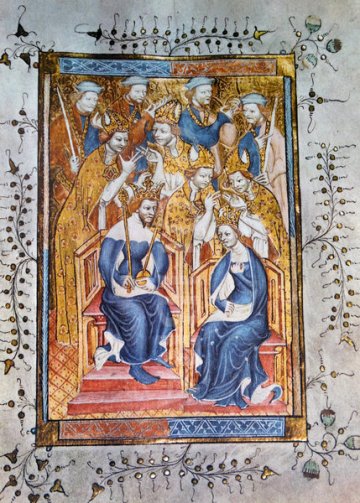 Richard III and Anne of Bohemia 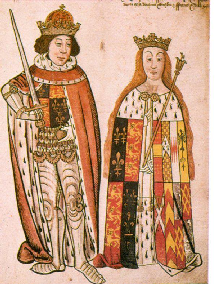