The scanty arches of St Oswald’s Priory lie tucked in a Gloucester suburb  a few minutes walk  from  the cathedral. Once a place of great importance, it was the burial spot of Queen Aethelflaed, daughter of Alfred the Great. She was a warrior-queen who fought the Vikings. Henry of Huntingdon wrote this about her–

Heroic Elflede! great in martial fame,A man in valour, woman though in name:Thee warlike hosts, thee, nature too obey’d,Conqu’ror o’er both, though born by sex a maid.Chang’d be thy name, such honour triumphs bring.A queen by title, but in deeds a king.Heroes before the Mercian heroine quail’d:Caesar himself to win such glory fail’d

Her husband Aethelred was also buried at St Oswald’s and it is though they were attempting to found a new royal Mercian vault after the destruction of the one at Repton by the Norse invaders.

Recently, on the anniversary of the Queen’s death, a re-enactment was held in Gloucester  with a funeral cortege bearing a ‘body’ arriving by water then passing through the town, past the cathedral and out to the priory.

As past of the commemorations, the local children were also asked to get involved with  the local archaeologists, and a hitherto unknown tower belonging to St Oswald’s appears to have been found.

Maybe futher excavation might also find the bones of this ancient Queen, although it seems most likely her remains and that of her husband and St Oswald himself were moved around in the 11/12c rebuildingof the priory, and then everything was destroyed in the Reformation, leaving little above ground 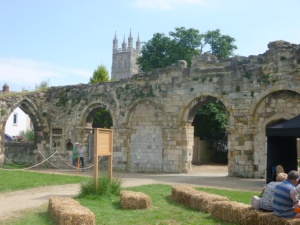 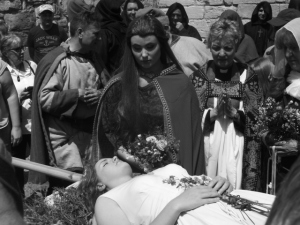