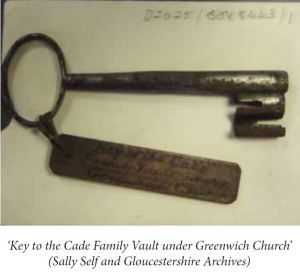 There is an interesting article by Sally Self in the Victoria County History, Gloucestershire, Newsletter 8, January 2018. I will repeat it in full, before making any comments of my own. Not to disprove anything, I hasten to say, but to show my own efforts to find out more about this key. I wish to thank Sally for giving me permission to reproduce her article.

“A recent discovery made while cataloguing at the Archives has intrigued several of us. A large iron key [estimated 10-11 cm] was found under documents that apparently had little relevance. The key has a wooden tag attached, noting that it belonged to the Cade family and was for the family vault. Showing the key to others elicited various suggestions. ‘They will have had to send for a locksmith’, ‘they would have needed a large hacksaw’ to ‘they won’t have been able to bury anyone’ and ‘explosives might be necessary.’

“When browsing for information on the ‘Cade’ family up sprung the words ‘Cade Key’. So, thought I, others have been there before me! Seemingly the family name was not ‘Cade’ but ‘Cade Key’ – I must have read the wooden tag incorrectly. Back to the key itself – but no it did indeed say ‘Key to the Cade Family Vault under Greenwich Church’.

“More research was needed. The ‘Cade’ family is of ancient Yorkshire lineage, probably pre-Conquest, with a coat of arms – I can buy a mug and/or a key ring embossed with their shield. The surname may derive from the word for a barrel or cask, possibly used as the sign for an ale house. There was of course Jack Cade of the Kent Revolt, 1450 and Shakespeare uses it in ‘stealing a cade of herrings’. According to family history sites, both the Cade and Cade Key family are now widely spread around the world, particularly in America and Australia.

“The Cade Key family vault is in Hampstead, where they lived in the early 19th century, William being nominated as a possible Sheriff for London, but he died in Bath in 1823. Further research into the families would have taken days and would probably not have shed any further light on ‘our’ key.

“So to the ‘Greenwich Church’. The most likely church is St Alfege of Greenwich, dedicated to the Archbishop of Canterbury, who was martyred on the site in 1012. The medieval church of 1290 collapsed in a storm of 1710 and the present church was designed by Hawksmoor. If indeed the Cades are buried there, then they have illustrious company – Thomas Tallis, General James Wolfe, Henry Kelsey, an English-born explorer of Canada, the actress Lavinia Fenton and others – unfortunately no Cades are acknowledged!

“So one is left to wonder – did they have to break into their vault? If anyone is at Greenwich and has time to visit the church, perhaps they could find the answer!”

An  intriguing item, this key. Why is it labelled as belonging to the Cade family vault at Greenwich, if there is no Cade family vault beneath that church? I agree with Sally that the church referred to has to be St Alfege’s, simply because there does not appear to be another candidate. However, there is a coat of arms for the Cade family of Greenwich. It is described in The General Armory as: “Erm. Three piles issuing out of a chief engr. Sa. Crest—A demi cockatrice gu. Winged or, combed of the first.” Which I think is something like the illustration below left, although I see no cockatrice, demi or otherwise.

So I investigated St Alfege’s. A church has stood on the site for 1000 years, and the present building is the third version. The medieval version was where Henry VIII was christened in 1491. According to From the Shadows: The Architecture and Afterlife of Nicholas Hawksmoor by Owen Hopkins:-

“During the night of 28 November 1710, a great storm ripped through London. Perhaps already weakened by the ‘Great Infamous Wind’ that had plagued Britain the previous month or maybe by excavations in the churchyard, the roof of the medieval church of St Alfege in Greenwich collapsed.”

When Nicholas Hawksmoor’s replacement church was built, the money ran out before his tower could be built, so in 1730 the old medieval tower was encased and redesigned by John James of Greenwich, with the addition of a steeple, to look as if it belonged to the rest of Hawksmoor’s design.

Is the crypt pre-Hawksmoor? It seems not. According to the National Churches Trust:

“The crypt is best known as the burial place of General James Wolfe but it was designed by Nicholas Hawksmoor to be a space for the living, and possibly a school. Soon after the church was consecrated in 1718, the parishioners of Greenwich decided they had other plans. People paid to be buried on the floor of the crypt and as a result the current floor level is about three feet higher than the original. Wealthy local families set up family burial vaults in the crypt, like the one used for James Wolfe. The vaults contain over 1,000 bodies. The crypt is currently only open to the public a few times a year.” 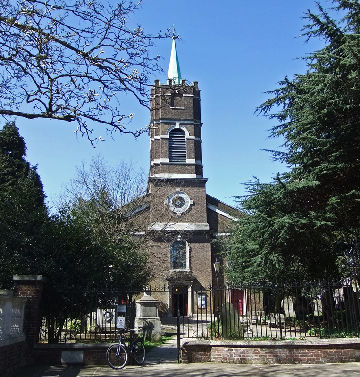 So I think the key must be 18th-century, as must be the Cade family vault to which it belongs. If there were to be such a vault. But there isn’t. Not in Greenwich, anyway. So which part of the key’s label is incorrect? The name Cade? The fact that it is concerned with Greenwich? Or maybe even that it isn’t the key to anyone’s vault, but to something else? Or, it belongs to the vault in Hampstead, where the Cades lived at the beginning of the 19th century. The site of the parish church of St-John-at-Hampstead (above) is, like St Alfege’s, about 1000 years old, and the present building is not the original, dating from 1747. There was a tomb in the churchyard (perhaps still is?) belonging to ‘Marck Cade, surgeon (1773)’. But if the key belongs to a vault in Hampstead, why is it in the Gloucester Archives? And how has it been misidentified?

When one thinks of the name Cade, it is almost always in connection with Jack Cade, who led a rebellion in Kent in 1450. Cade is still a very interesting and slightly mysterious figure. According to Matthew Lewis:-

“In July 1450, a mysterious man known as Jack Cade led a huge force of common men from Kent into London to protest against the ailing government of the Lancastrian king Henry VI. This episode is generally regarded as being outside the bounds of the Wars of the Roses, but those edges are blurred and elastic. 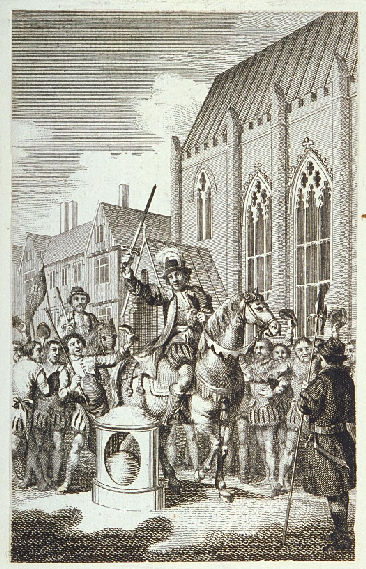 “When Jack Cade entered the capital he struck the London Stone, which can still be seen on Cannon Street, and, according to Shakespeare, proclaimed: “Now is Mortimer lord of this city!” After this, Cade openly adopted the provocative name John Mortimer. The Mortimer line was considered by many to be senior to the Lancastrian line, since the Mortimers were heirs apparent to Richard II – so adding weight to the later Yorkist claim to the throne.

“In 1460 Richard, Duke of York would trace his lineage from Edward III’s second surviving son, Lionel, Duke of Clarence, whose only daughter had married Edmund Mortimer. The House of Lancaster was descended from John of Gaunt, Edward III’s third son. The Mortimer Earls of March had been considered the lawful heirs of the childless Richard II before he was deposed, and the Lancastrian kings eyed them with suspicion. Was Jack Cade a son of this deposed line seeking restitution?

“Many would later claim that Richard, Duke of York had arranged for Cade to use the name ‘Mortimer’ to measure the response to it. Stow’s Chronicle, a Tudor source, claimed that the object of the uprising was to place York upon the throne, and Baker’s later A Chronicle of the Kings of England called Cade “an instrument of the Duke of York”.

“Cade – who was captured and fatally wounded following the failure of his rebellion – is a fascinating, elusive figure. Was he a genuine claimant to the throne, a social campaigner, or a puppet?”

A very interesting man indeed, who may have been of far greater significance than we fully realize now. Or, he may simply have been a cypher. Unless evidence is found that tells us one way or another, we are not likely to find out now.

Whatever the facts, in 1450 he appeared to be firmly based in and connected to the south of England, Sussex and Kent. According to surnamedb.com:- “the first recorded spelling of the Cade family name is shown to be that of Eustace Cade, which was dated 1186, in the ‘Pipe Rolls of Lincolnshire’, during the reign of King Henry II.” The Victoria County History newsletter says the family originated in Yorkshire. I do not know which is right. Perhaps both are, for I suppose they are not mutually exclusive.

By the way, the reason surnames became necessary was in order to tax people! Might have known. Otherwise, I suppose we’d all still be something like Will, son of Will, or Margaret, daughter of Will, and so on.

But the mystery of the Cade key lingers on. Has anyone any ideas about it? In the meantime, I do hope a present member of the Cade family isn’t seeking a key to the ancestors’ vault. . .in Greenwich or Hampstead.