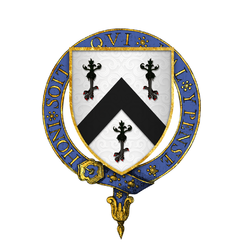 Reginald Bray was born in Worcester in around 1440. He was the second son of Sir Richard Bray, a surgeon, and Joan Troughton. He was educated at the Royal Grammar School at Worcester. Leland mentioned that his father, Sir Richard Bray was Henry VI’s doctor. Reginald was married to Catherine Hussey.
Bray is described by The History Jar as “Margaret Beaufort’s man of business” and then as “Henry VII’s advisor – a sort of Tudor Prime Minister and Chancellor of the Exchequer all rolled into one politically astute package”.
Bray was Receiver-General for Sir Henry Stafford, third husband of Margaret Beaufort. After Stafford’s death Bray continued to serve Margaret Beaufort. In 1483 Bray acted as go between for Margaret and John Morton, Bishop of Ely, who was then drawing his jailer, Henry Stafford, Duke of Buckingham, into the conspiracy to dethrone Richard III in favour of Margaret’s son Henry Tudor. Bray raised much needed funds for Richmond and won several key gentlemen to the Tudor cause including Giles Daubeney and Richard Guildford.

Annette Carson reports in her book “The Maligned King” that “Margaret’s household included several useful people who later played a leading part in the secret preparations that led to her son’s invasion of England. One was her receiver general, Reginald Bray, who would become one of the Tudor king’s most prominent councillors”. This was on page 98 of the updated version of Annette’s book and dealt with Hastings and his fall from grace. Annette also reports that Bray was a close relative of Hastings’ wife, Catherine.

After Buckingham’s rebellion Richard pardoned Bray and some sources maintain that this was for being associated with Henry VI, however, others say that it was because of his part in Buckingham’s rebellion. Annette Carson, on page 162 of the updated version of her well researched book “The Maligned King”, tells us that according to Vergil it was Buckingham’s idea to marry Tudor to a female heir of Edward IV. According to Vergil after Buckingham had persuaded Morton of his plan Morton procures Bray as a messenger by presumably sending word to Margaret Beaufort in London that he needs a confidential go between. Vergil then produces a second version of the marriage negotiations where the plan for the marriage is hatched between Margaret Beaufort and Elizabeth Woodville. I think that there can be no doubt that Bray was engaged in spying for Margaret Beaufort and probably Morton too.

Bray was created Knight of the Bath at Henry Tudor’s coronation and afterwards Knight of the Garter. In the first year of Tudor’s reign he was given the Constableship of Oakham in Rutland and was appointed joint Chief Justice with Lord Fitzwilliam of all the Forest south of the Trent and chosen for the Privy Council, then made High Treasurer and Chancellor of the Duchy of Lancaster. So while we cannot be certain of the exact events of the summer of 1483, the fact that Bray was so well rewarded by Tudor surely means that he played a big part in securing Tudor’s usurpation of the throne. He eventually died in June 1503.