Added to the list of monarchs and notables found or potentially to be found beneath car parks, tennis courts, and other such mundane places must be the Queen of Henry III, Eleanor of Provence. Buried in Amesbury Priory after her body was kept in ‘storage’ by the nuns for two months while her son, Edward I, was away at war, the grave was lost, like so many others’, during the Reformation. Quite possibly  the architect Inigo Jones stumbled over the Queen’s gravesite while plans were being drawn up to build a classical mansion on the abbey site. He describes a chest tomb which, when pried open, revealed a skeleton wearing ‘rich garments.’ There are only one or two possibilities as to whom these remains might belong to, and Eleanor is the prime candidate. No further mentions of the remains exist and it is presumed the tomb was resealed and then the site built over and landscaped.

Some years ago, archaeologists did some geophysics on the large open green space in front of the current Amesbury Abbey (the classical mansion.) Nothing showed up of interest–not even buildings, let alone a Queen’s last resting place.

However, bits of lead and medieval glass were recently turned up by the spade in the nearby flowerbeds; presumably these came from the destroyed priory church. Measuring the ground to the approximate length of the church,  the site of the high altar appears to be somewhere between a large tree and a small car park for residents on the private estate. Eleanor’s grave is thought to be in this approximate area.

Eleanor of Provence is one of England’s least known queens, and probably one of the most maligned. In several books about her husband, Henry III, she scarcely gets a mention, save to chastise her for promoting her family members or to recount the notorious incident at London Bridge, when her barge was pelted with stones and rubbish. While the promotion of her family was one of her ‘failings’, in fact Eleanor was a model wife and a medieval mother who really cared about her children, even causing diplomatic issues over their care–for instance, when her son Edward fell ill at Beaulieu Abbey, she insisted upon staying with him, overriding the abbot who said that no woman, not even a queen, could stay in the abbey. There was no hint of any marital infidelities by either King or Queen, and Henry had known no mistresses or illegitimate children. Eleanor was so trusted in her abilities, she was made regent in his absence; she also gathered an army in France when Henry and Edward were taken prisoner.

Maybe, like Richard, her reputation should be up for a revamp.

She is not to be confused with another royal Eleanor buried somewhere in Amesbury–Eleanor, Pearl of Brittany.  That Eleanor was the daughter of Geoffrey Plantagenet, son of Henry II, and sister to the unfortunate Arthur of Brittany. She was England’s longest-serving political prisoner; accused of nothing,  her only crime was having royal blood and a strong claim to the throne by strict primogeniture.

There has been some confusion about the actual burial-place of both women, as the local parish church of St Mary and St Melor was once part of an abbey. Many people assumed that is was the church for the vanished priory. In fact, it was part of an earlier monastic foundation–there were TWO religious houses in Amesbury, although St Melor’s became the parish church at a fairly early date. It is most likely that this church IS where Eleanor of Brittany is buried, due to the Breton connection, and geophysics have shown there are several gravecuts before the high altar. However, Eleanor of Provence almost certainly lies  in the priory that stood in the fields to the back of the older foundation. 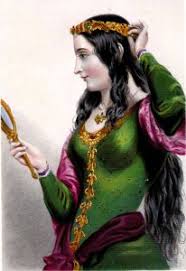