Today in 1606, the last of the “Gunpowder Plotters”, including Guido Fawkes, were executed at Tyburn. Some had been put to death the previous day whilst others, including Robert Catesby, were shot at Holbeche House 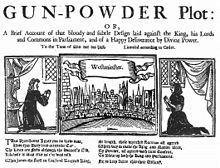 , resisting arrest, soon after the plot was discovered.
All of the executions were carried out by drawing, hanging and quartering yet the commemorations each November feature an effigy of Fawkes being burned.
The other advantages would be that the ceremony would still be practical in wet weather, that the effigy could be repaired and recycled for the following year and that small mammals such as hedgehogs would not be endangered.