The Court of Requests and Thomas Seckford

In 1484, King Richard III created a minor equity court to deal with minor disputes in equity; these are disputes where the harshness of common law would be acknowledged by those appointed by the Crown. Equity courts were mostly seen as the Lord Chancellor’s remit, and the split of the Chancery Courts from the Curia Regis happened in the mid-fourteenth century. By the time of King Richard III, the Chancery Court had become backlogged from cases pleading the harshness of the common law, and the Court of Requests was no doubt and attempt to remove minor equity cases from the backlog and free up court time – Richard’s attempt at reducing bureaucracy and better administration.

So successful was the Court of Requests that it survived Richard’s reign, and was formalised by the Privy Council of Henry “Tudor”, the usurper. It was a popular court, because the cost of cases was relatively low and justice was swifter than the common law courts, which would ultimately prove its undoing.

Thomas was an influential man, even before Elizabeth appointed him to the Court of Requests in 1558. He was MP for Ripon in November 1554, just months after his Grey cousins were executed, and was then elected MP for Orford (a fishing village on the Suffolk Coast which had two MPs despite only having a handful of residents) in 1555 and again in 1558. He was MP for Ipswich in 1559 and for Suffolk in 1571. Seckford Hall, (right) near Woodbridge, is known t 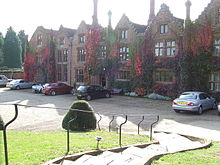 o have hosted Elizabeth’s court as she progressed, and was built in 1530 as the Seckford Family home; it is now a hotel, while a golf club sits within what was once its grounds. The A12 Martlesham bypass sweeps across the Finn Valley in front of the hall, giving wonderful views to motorists but somewhat destroying the character and appearance of the building and grounds. As an interesting side note, the hotel contains furniture from Buckingham Palace and Windsor Castle, including (allegedly) the chair Henry the Usurper died on.

Thomas Seckford commissioned Christophe Saxton to create the first surveyed atlas of the realm, which Elizabeth granted him a patent for its sole publication for ten years. This made him an even wealthier man and he added to his estates Clerkenwell, endowing the Seckford Almshouses with income from Clerkenwell. His wealth also led to the establishment of a free school, Woodbridge School, which is a minor public school. His wealth still helps young and old in Woodbridge today.

The Court of Requests fell foul of the common law courts at the end of the 16th century. Angry that business deserted them in favour of the more efficient Court of Requests, the common law courts overturned a number of decisions of the Requests Court, and banned them from imprisoning people; ultimately this was to prove their undoing, and the English Civil War, which led to the invalidation of the Privy Seal, was the final death of the Court, set up all those years before by King Richard for the better de

Thomas Seckford (left) died in January 1587, although we are not sure exactly when, whilst in his early seventies. His mother was Margaret Wingfield, relating him to both the de la Pole and Brandon families, and her mother was an Audley. In fact, Thomas could claim double descent from Edward I, through Joan of Acre, as well as many other great mediaeval magnates, including Edmund “Crouchback”. At his death, Thomas Seckford remained without issue, just like his fellow long-term royal servant Henry Hastings, Earl of Huntingdon. I need hardly add that Huntingdon was his cousin.

4 thoughts on “The Court of Requests and Thomas Seckford”