Where to find that “Tudor” Y-chromosome? 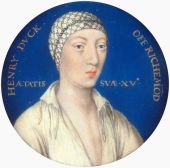 This very good blog post details the career and planned future of Henry Fitzroy, Duke of Richmond, who might have succeeded Henry VIII had he not died suddenly at seventeen and a legitimate half-brother been born a year and a quarterlater. It also states his original and current burial places, the latter being St. Michael’s Church, Framlingham, together with his wife, Lady Mary Howard

Henry Fitzroy, whose mother was Elizabeth Blount, is one of the few adults in the disputed male line from Katherine de Valois’ widowhood. Her sons from this relationship(/s) were Edmund and Jasper, surnamed either Beaufort or Tudor, the second dying without issue in 1495. Edmund had only one son, later Henry VII. He had several sons – some died in infancy and Arthur as a teenager without issue in 1502, leaving Henry VIII. Henry Fitzroy and Edward VI were Henry VIII’s only sons not to die in infancy. That leaves seven men, five of whom are guaranteed to share a Y-chromosome, plus Fitzroy and Jasper, just in case their mothers’ private lives were even more complicated.

We also know precisely where to find Owain, the last proven Tudor – somewhere within the pre-Reformation bounds of Hereford Cathedral. So the evidence to test John Ashdown-Hill’s theory is definitely at hand.

The other point to remember is that the earldom of Richmond was under attainder from 1471-85, so the future Henry VII did not hold it until he “unattainted” himself after Bosworth.

17 thoughts on “Where to find that “Tudor” Y-chromosome?”