St Erasmus in Bishops Islip’s Chapel, Westminster Abbey by Joseph Mallord William Turner c.1796.  The  original chapel of St Erasmus, built by Elizabeth Wydeville,  was the site of Anne Mowbray’s first burial and after recovery of her coffin she was reburied in the rebuilt Chapel.

Anne Mowbray, Duchess of Norfolk, was born in Framlingham Castle, Suffolk on Thursday 10 December 1472.  John Paston wrote ‘On Thursday by 10 of the clock before noon my young lady was christened and named Anne’ (1).  Anne died, just 8 years later and a few weeks short of her 9th birthday at Greenwich Palace,one of  her mother-in-law’s,  Elizabeth Wydeville,  favourite homes,  on the 19 November 1481, where presumably she was being raised.   Anne was the sole heiress of John de Mowbray, Duke of Norfolk, who died suddenly on the 14 January 1476 when Anne was three years old.  This left her as one of the most sought after heiresses of the time and ‘ten days later it was known that Edward lV was seeking her as a bride for his younger son, Richard of Shrewsbury, Duke of York'(2).   Agreement was eventually reached between King Edward and Anne’s mother, Elizabeth Mowbray nee Talbot, the Duchess of Norfolk that the Duchess, with the Duchess agreeing ‘to forego a great part of her jointure and dower lands in favour of her daughter and little son-in-law, Richard, Duke of York.  This act settled also settled the Norfolk lands and titles on the Duke of York and his heirs should Anne Mowbray predeceased him leaving no heirs’ (3) which is precisely what transpired.  Nothing has survived of Elizabeth Mowbray’s personal thoughts on this.   The children were eventually married on the 15 January 1478 in St Stephens Chapel, Westminster, with the bridegroom’s uncle-in-law, Richard Duke of Gloucester leading her by the hand  and Anne is perhaps best known for being the child bride of one of the ‘princes’ in the Tower. 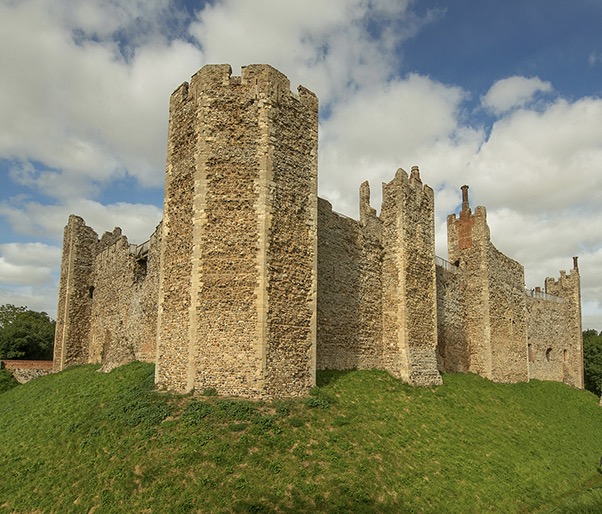 Framlingham Castle, Suffolk.  Home to the Mowbrays and where Anne Mowbray was born Thursday 10 December 1472.

Her father-in-law sent three barges to escort her body back to Westminster, where she lay in state in the Jerusalem Chamber before being buried in the Chapel of St Erasmus in Westminster Abbey which had been built recently by Elizabeth Wydeville, the funeral costs amounting to £215.16s.10d.  This chapel was pulled down in 1502 to make way for a new Lady Chapel built by Henry Vll.  When the chapel was demolished Anne’s coffin was removed to the convent of the Minoresses of St Clare without Aldgate, where her mother,  Elizabeth Mowbray, in the interim,  had retired to.   It was believed that Anne had been reburied, along with others in the new chapel, dedicated to St Erasmus by Abbot Islip who had managed to rescue the Tabernacle from the old chapel and set it up in the new chapel which is now known as the Chapel of our Lady of the Pew.

It is intriguing to remember that Anne’s mother, Elizabeth Mowbray nee Talbot was the sister to Eleanor Butler nee Talbot.   So ironically Anne’s aunt, Eleanor, was her father-in-law’s true wife, the irony of which surely would not have been wasted on King Edward unless he was suffering from selective amnesia!  Her mother’s privy thoughts on this matter, assuming Eleanor had told of her secret marriage to Edward,  are unrecorded as are her thoughts on the ‘unjust and unacceptable'(4)  division of the Mowbray inheritance.  The explanation of this rather unsavoury treatment of the Mowbray inheritance is rather complex and I wont go into it here suffice to say anyone interested in finding out more should read Anne Crawford’s article, The Mowbray Inheritance (5) which covers the matter more than adequately. 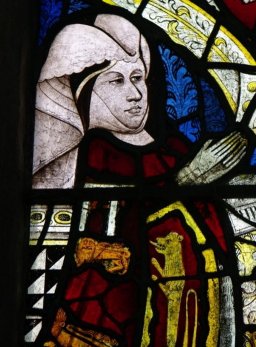 Anne, the nature of her final illness eludes us, would no doubt have gently receded and become forgotten in the mists of time had not her coffin been discovered by workmen on the 11 December 1964  and she was propelled into front page news leading to her descendant, an outraged Lord Mowbray, protesting in the strongest possible terms about the treatment of her remains.  This quickly led to the matter being swiftly resolved, and Anne’s remains, surrounded by white roses, were once again laid in state in the Jerusalem Chamber, as they had been nearly 500 years previously.  Anne was reburied in the Chapel of St Erasmus, with erroneous and histrionic reports stating that she had been interred ‘as near as possible’ to the remains of her young husband, Richard, whose purported remains lay in the infamous urn in the Henry Vll Chapel.  Later Lawrence Tanner, Keeper of the Muniments and Librarian of Westminster Abbey (and in a position to know) was to debunk this myth writing that he, himself, had suggested that Anne’s remains be reinterred ‘very near to the probable site of her original burial place’ which was what duly happened(6).

Anne’s lead coffin with latin inscription, with her ‘masses of brown hair’.

So what happened from the time of the discovery of Anne’s lead coffin to her reburial in the Abbey?  The story is taken up by Bernard Barrell, a former member of the Metroplitan Police, who was now an ‘unofficial police contact’ whenever a coffin was unearthed in the area.  According to Mr Barrell, in December 1964 workmen using a digging machine opened up a deep void in the ground revealing a brick vault filled with rubble, wherein they found a small lead coffin.  A police constable being called to the scene the coffin was transferred to Leman street Police station.  When Mr Barrel was called to the police station he was able to identify where the coffin had been discovered as the site of the former convent and was medieval in date.  After satisfying the Coroners office that the burial was medieval and of archaeological interest he was instructed that if  he was ‘unable to dispose of the coffin to a bona fide claimant’ within 24 hours it would be buried in a common grave in the City of London Cemetery, Manor Park.  In the nick of time Mr Barrell noticed a plate attached the upper surface of the coffin which had been damaged when removed from the ground and stood upright.  On cleaning the plate with a wet cloth, Mr Barrell revealed a medieval ‘black letter’ text in Latin which was difficult to decipher however he could make out two words ‘Filia Rex’ (Son of the king).  Realising this was no ordinary burial but that of someone of high station a medieval latin scholar was summoned to the station who deciphered the whole text. The coffin was then taken by police van to the museum of London, where the remains were examined, the coffin conserved and repaired. (7)

Lawrence Tanner then takes the story over.

‘I saw the body a few days after the coffin had been opened and a very distressing sight it was and after again, after it had been cleaned and beautifully laid out in its lead coffin.  She had masses of brown hair’.  Tanner as already explained, suggested that a grave be made as near to where she was previously buried.  And ‘There on a summer evening, after having laid in state covered by the Abbey Pall in the Jerusalem Chamber, the body of the child duchess was laid to rest.  It was a deeply moving and impressive little service in the presence of a representative of the Queen, Lady and Lord Mowbray, Segrave and Stourton (representing Anne’s family),  the Home secretary, the Director of the London Museum and one or two others (8) 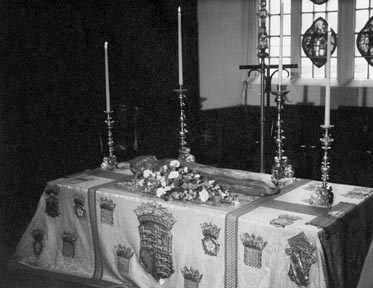 Anne’s lead coffin surrounded by white flowers and candles, lying in state in  the Jerusalem Chamber, on the Westminster Pall.

And so, on the 31 May 1965,  Anne was reburied in an honourable place, with tenderness, love and care.  It has been said that her coffin,  at the Minories,  had been forgotten and the intention was for her to be reburied when the new chapel was completed.  But I’m unconvinced.  Although as far as I can ascertain it was never mentioned in Elizabeth Talbot’s will, only that she be buried near to Anne Montgomery,   I believe that the widowed Duchess of Norfolk, then living in retirement at the convent, requested that Anne, her little daughter be returned to her,  finally,  with the intention  that when her time came,  she would be buried near to her  daughter.  John Ashdown-Hill has written that ‘The remains of Elizabeth Talbot,  Duchess of Norfolk, must have been lying quite close to those of her daughter…they were apparently not noticed, or any rate, not identified when Anne’s body was found’ (9)

The epitaph on the coffin may be translated as “Here lies Anne, Duchess of York, daughter and heiress of John,late Duke of Norfolk, Earl Marshal, Earl of Nottingham and Warenne, Marshal of England, Lord of Mowbray, Segrave and Gower.  Late wife of Richard Duke of York, second son of the most illustrious Prince Edward the Fourth, King of England and France, and Lord of Ireland, who died at Greenwich on the 19th day of November in the year of Our Lord 1481 and the 21st year of the said Lord King”.