Here is an article from the Leicester Mercury:

“Apart from a recent council explanatory information panel tucked on its side wall above a litter bin, few passers-by would know that the modern brick box building housing a hotel and casino was the site of Leicester’s most famous inn, that once was the penultimate stop of a king of England. For this is the spot on which the famous Blue Boar Inn was sighted.

“It’s a name known to everyone with an interest in historic Leicester. It owes its fame to a watershed in England’s history and, of course, to a monarch whose name has recently made Leicester known worldwide.

“Today’s bland building, out of scale and style with the rest of Highcross Street, is the site of the old Blue Boar Inn, from where King Richard III and his nobles led his army into the Battle of Bosworth, which ended the Wars of the Roses – it also ended the king’s life and the Plantagenet dynasty.

“On August 20, 1485, Richard came to stay at the Blue Boar – probably then known as the White Boar – because, it seems, Leicester Castle was by then in a state of decline and was considered unfit and unprepared for the monarch. So, Richard went to what was then the town’s best inn. It was situated in Highcross Street, then Leicester’s main thoroughfare.

“Although the inn has been immortalised by great Leicester artist John Flower (see above) it is thought that what is seen in his drawing was just one wing of what would have been, in Richard III’s time, a much larger building. The king is thought to have occupied the large room on the first floor of the portion of the inn we see in Flower’s drawing.

“After this historic event, the story is that the bed, which it is said the king brought with him, was from then on known as the King’s Bed and that many years later, a hidden treasure of coins was found in the bedstead. In 1605, the inn’s landlady, Mrs Clarke, was murdered “through connivance of her female servants, in order to obtain possession of the gold”.

“Since the discovery of Richard III’s remains, Leicester has become a place of pilgrimage with visitors from all over the world coming to the Cathedral and the visitors’ centre. Wouldn’t it have been wonderful if the Blue Boar had been preserved, so that, too, could have been included on the pilgrims’ schedule?

“However, before we begin to blame 20th century planners for the inn’s destruction, we have to go back much further – to the early Victorian period, in fact, as it was 1836 when the Blue Boar was felled, having “passed into the hands of a speculative builder who waved aside all protests and tore the place down”. Sounds familiar, 200 years on. This act was described by Professor Jack Simmons as “a hateful act of vandalism”.

“In its place a terrace of houses was built. In the 1960s, these houses were demolished and a similar sort of box building built, housing the Exquisite Knitwear company.

“This area is once again becoming a focal point of Leicester’s commercial life.

“Today’s replacement for the Blue Boar Inn is a Travelodge – which is rather appropriate, when you think about it.” 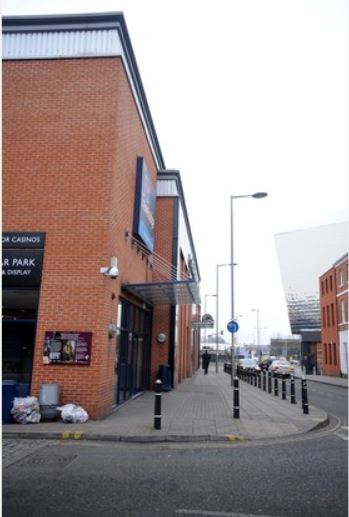