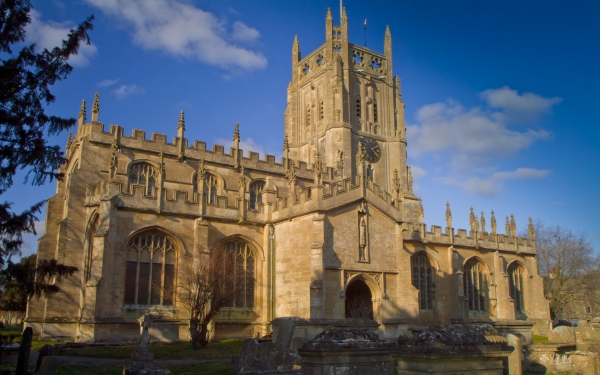 St Mary’s, Fairford, Gloucestershire.  ‘A complete and perfect Perpendicular church’  and famous for it fine collection of medieval glass.

Described in Betjeman’s Best British Churches as ‘a complete and perfect Perpendicular’ church(1) this beautiful wool church was rebuilt by John Tame, a wool merchant from Gloucester , in the late 15th Century to replace a much older church.  The tower had already been rebuilt by Richard Beauchamp, Earl of Warwick and Lord of the manor around 1430.  St Mary’s possesses a complete set of medieval stained glass, amongst the finest in England and it is this glass that I want to focus on now.  The glass was made between 1500 and 1517 and, other than the west window, which was severely damaged in a storm in 1703 and later restored, the glass has somehow miraculously survived, although how this has happened remains a mystery.  It has been suggested it has survived because of the royal portraits contained in them. The windows are thought to have been a gift from Henry Vll himself.  It should be remembered that when Henry had the young Edward Earl of Warwick executed in 1499 he seized his estates which included Fairford.  It has also been suggested that Henry may have then given the manor to Prince Arthur whose badge of ostrich feathers and motto appear in some of the windows and one of the portraits is thought to have been modelled up his wife, Katherine of Aragon.  Thirty years after Arthur’s death Henry Vlll presented Fairford manor to Katherine of  Aragon after he had divested her of her title of queen.  The portraits are mostly members of the Tudor royal family and influential people in the Tudor court  although one of them is thought to be of a Plantagenet, that of Henry’s brother-in-law, the young Edward of Westminster, one of the ‘princes in the Tower’   Other portraits were modelled on Henry himself, obviously, his wife Elizabeth of York, Catherine of Aragon, Prince Arthur, Henry’s  daughters Mary and Margaret and a young Henry Vlll and last but not least Margaret Beaufort (2)   I also think its possible that one of them is based on Richard lll, but that is purely my own speculation.

Nave, north aisle, north Window.  The figure of the Queen of Sheba is believed to be a likeness of Elizabeth of York 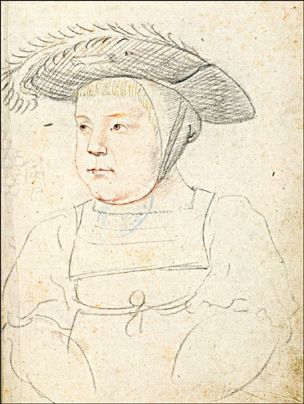 Holbein’s sketch of Henry Vlll as a child to compare 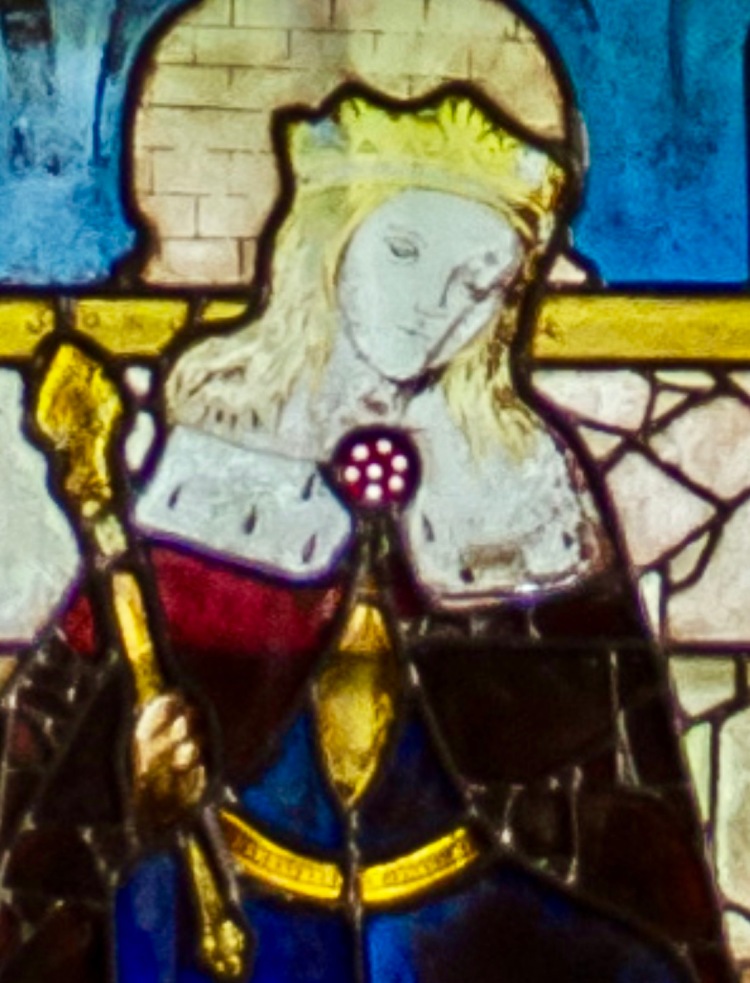 Nave,north aisle, west window.  The figure of Solomon is thought to have been modelled on Edward of Westminster, one of the ‘princes in the Tower’ and brother to Elizabeth of York

Nave, north aisle, west window.  Could this figure be Morton? It has been described as Wolsey but I disagree.

A wooden boss on the roof of Bere Regis church thought to represent Morton in comparison. 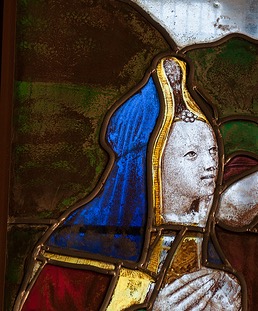 Chancel, south chapel, Corpus Christi Chapel, east window.  This version of the Virgin Mary is believed to have been modelled on Mary Tudor, Henry Vll’s daughter.   See picture below to compare likenesses.

A portrait of Mary Tudor to compare to her likeness in the above portrait of her at Fairford. 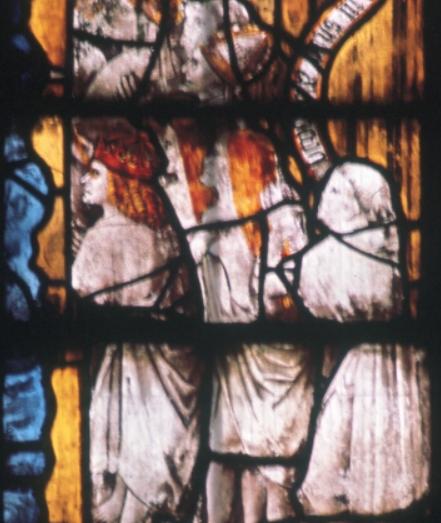 Nave, West Window.  The figure with the crown is thought to be that of Henry Vll entering Heaven.

Chancel, north chapel, Lady Chapel, north window.  The Magus is believed to have been modelled on Prince Arthur.

Two kings here..Henry Vl on the left and Henry Vll on the right. 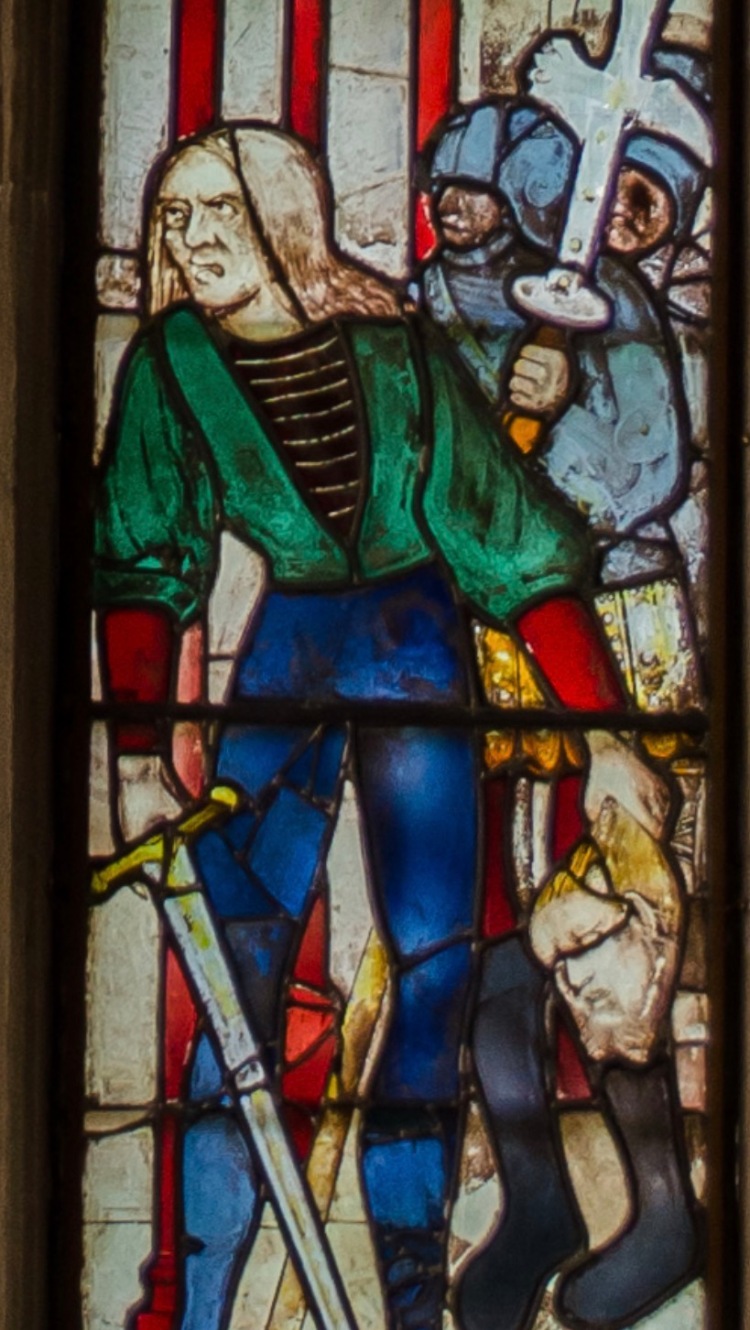 Purely my speculation here but could the warrior holding the severed head be a Tudor representation of King Richard lll?  For surely one shoulder has been depicted higher than the other one!