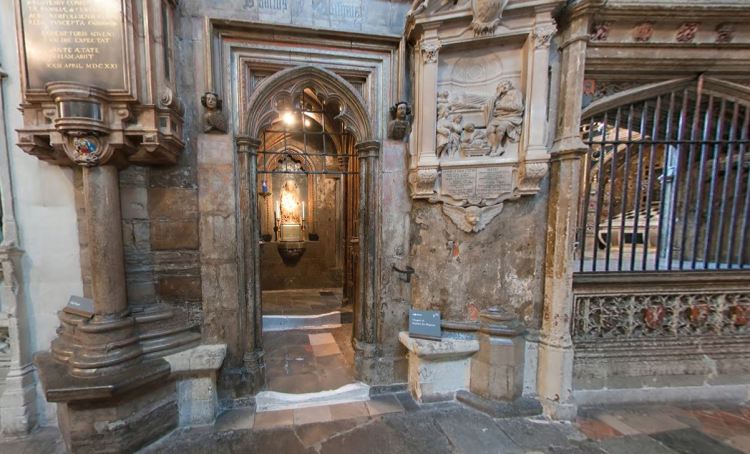 Tucked away off the north ambulatory of Westminster Abbey, so small it doesn’t seem possible it’s anything more than an entrance to the adjacent Chapel of St John the Baptist (which is also known as the Chapel of St Erasmus) is the Chapel of Our Lady of the Pew. The original entrance to the St John the Baptist chapel was closed in 1524 to accommodate the tomb of Bishop Ruthall, and a way was knocked through from the tiny Chapel of Our Lady of the Pew instead.

It is situated opposite the Shrine of St Edward the Confessor, and is only 5’ square, so strictly standing room only. But there was once an important royal worshipper who went there alone. King Richard II knelt in prayer there, in front of the beautiful Wilton Diptych, which was kept on a ledge in front of a statue of the Virgin Mary. [Not the statue that is there now—the first image of the Virgin Mary was presented by Mary, Countess of Pembroke, who died 1377. The hooks and outline of this image still remain.]

It is said that as a boy, Richard prayed here before riding out to face the Peasants’ Revolt at Mile End. As a man, he knelt to pray for the soul of his dearly missed wife, Queen Anne of Bohemia. And he would have been there countless times afterward.

The chapel has been described thus: “The vaulting has red stars on a white ground with a roof boss depicting the Assumption of the Virgin, who is dressed in red. The ribs have barber pole bands and rosettes and the walls are diapered over with pine-shaped designs, on each of which is a fleur de lys. This was a popular design in the late 14th century. The antlers and head of a white hart, a badge of Richard II, can still be made out.”

The name Our Lady of the Pew might have been taken from the French Notre-Dame-du-Puy, or, alternatively, from the original meaning of “pew”, a small enclosure. At the beginning of the reign of Richard II the chapel was even smaller than now! Little more than 4’ 9”.

There was at one time no access from the Chapel of Our Lady of the Pew into the Baptist’s chapel, but the two were probably joined by an aperture through the party wall to afford Richard II a view of the services held in the Baptist’s chapel. It must have been almost claustrophobic for him, but also how very private. He used it for his own personal devotions, and although it has been altered since his day, it somehow retains a sense of him.

You will find a great deal more about this little chapel in Fourteenth Century England, Volume 3 by Chris Given-Wilson.

One thing puzzles me, however. If you stand outside the chapel, with your back to the shrine of the Confessor, you will see two “angels” on either side of the arched entrance. They are label- or head-stops, depicting what appear to be two young men with shields. 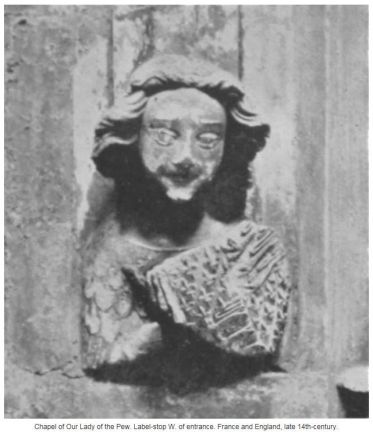 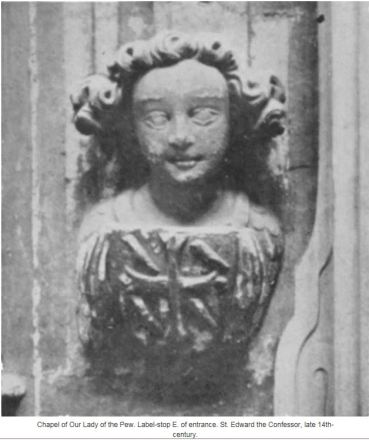 The one on the left seems very like Richard II, and his shield is definitely royal, with leopards and fleur-de-lis. His eyes seem like those of Richard as depicted in his tomb effigy. The one on the right has much curlier hair, but similar eyes, and holds the arms that have been credited to the Confessor.