A tale of John of Gaunt and two sisters…. 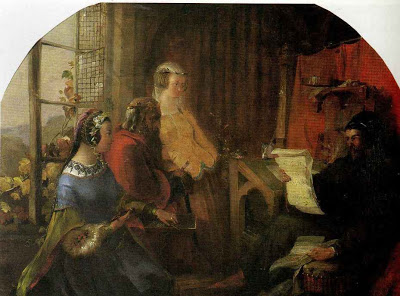 The above painting by William Bell Scott depicts Chaucer reading to an aging John of Gaunt. The ladies are the two men’s wives, Philippa and Katherine, born de Roët.

Everyone knows that John of Gaunt (1340-1399) had three wives, the last of whom was Katherine Swynford (nee de Roët, 1350-1403), who had been his children’s governess. She then became his mistress (during his second marriage to Costanza of Castile) and finally, in 1396, his third duchess. The last move, was very unpopular at the time, for it was felt Gaunt, a king’s son, had demeaned himself by marrying well below his station…and that she had reached up well above hers.

Katherine, married at twelve to a Lincolnshire knight, Sir Hugh Swynford, had a sister, Philippa (c. 1346–c. 1387) who was a damoiselle of the queen, and who by the end of 1366 had been married to Geoffrey Chaucer. Yes, the Geoffrey Chaucer, who was a very close friend of John of Gaunt. Was the Chaucer marriage a love match? After all, at the time he was a mere squire, whereas she was relatively highborn, the daughter of a prominent Hainault family of rich landowners, or so I understand the de Roët sisters’ background to be. The Chaucer union is subject to a lot of speculation.

Let us go back before 1366, before Philippa became Geoffrey’s bride. John of Gaunt is renowned for his interesting private life, as described above, and seems to have been a Plantagenet charmer par excellence. By inheriting the huge wealth and status of the Duchy of Lancaster (through his first wife, Blanche) he was the richest, most influential man in England, especially when his father, Edward III, began to descend into senility. Gaunt had an eye for a beautiful woman, and the suggestion is that the de Roët sisters were both beautiful. I don’t know if they warranted the description, but I doubt very much that they were plain, stodgy dumplings. Men like Gaunt are not drawn to the nondescript.

So, Katherine Swynford was governess to his daughters. At this time her sister Philippa was unmarried, and also the queen’s lady. The queen, another Philippa, was from Hainault too, so I imagine this was a very good reason to have Philippa de Roët close to her. And then there was John of Gaunt, master seducer. The suspicion is that his eye fell upon Philippa first. It wasn’t the done thing to deflower unmarried ladies, and maybe this precluded such an affair in his eyes, except that there are suspicious signs that he broke the rule.

He was not a dishonourable man, and took his responsibilities seriously. Dates fit for him to have bedded Philippa and got her in the family way. In September 1366, before leaving for a campaign in Spain, Gaunt granted Philippa a lifetime annuity. It was very generous, and surely he had no reason for doing such a thing. Some present-day thinking is that Gaunt protected her by paying his good friend Chaucer a great deal to marry her. She was to give birth to a daughter, Elizabeth, the appropriate number of months later. Elizabeth would become a nun and enter the prestigious royal Abbey of Barking. 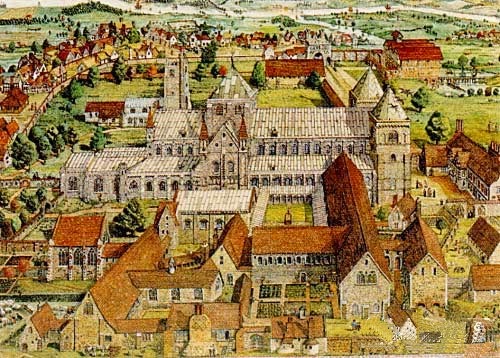 For the rest of his life, Gaunt was especially kind to Elizabeth, who might well have been his daughter. His particular favour to her suggests he knew she was. There were also more gifts, opportunities and annuities to the Chaucers.

Was Gaunt Katherine Swynford’s lover at the same time he was bedding Philippa? That we’ll never know, just as we will never know the truth about his dealings with the latter. All those gifts and favours are suspicious though. Why would Gaunt bestow such bounty upon Philippa? Why continue to be so concerned about her? She was by then a married women. Did the affair continue after she became Chaucer’s wife? Was Chaucer a complacent husband, paid well enough to say nothing and just let his wife get on with it? 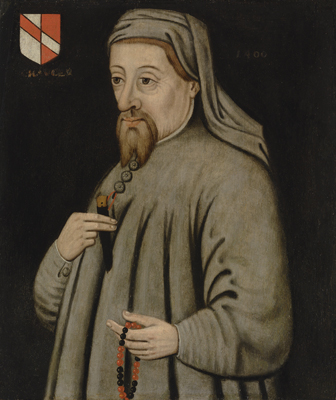 Or, as some of you will no doubt tell me, Gaunt did no such thing. The Chaucer marriage was a love match and Gaunt was merely a generous lord. Possibly. Possibly, too, Elizabeth Chaucer was of royal blood.

5 thoughts on “A tale of John of Gaunt and two sisters….”