Unicorns do not exist. They never have. Well, that is the general consensus. They are mythical beasts, along with the dragon, centaur, phoenix and so on, but in the medieval period the unicorn was believed in. It was thought that to hunt the unicorn was perhaps the greatest hunt of all, surpassing even the white hart. How disappointing it would have been if such a wondrous creature was really only the rhinoceros. As to the numerous superstitious mentions of using unicorn horn to protect from poison and so on, it seems we can be fairly sure that the horn in question was actually that of the narwhal.

There are seven references to the unicorn in the Bible, which tell of the creature being powerful, dangerous, impossible to tame and worthy of respect, but its physical appearance is never mentioned. It is in the Physiologus, an early book of animal stories, which may have been written by a 2nd-century Christian, that a description appears:

“Unicornis the unicorn, which is also called Rhinoceros by the Greeks, is of the following nature. He is a very small animal like a kid, excessively swift, with one horn in the middle of his forehead, and no hunter can catch him. But he can be trapped by the following stratagem. A virgin girl is led to where he lurks, and there she is sent off by herself into the wood. He soon leaps into her lap when he sees her, and embraces her, and hence gets caught.” 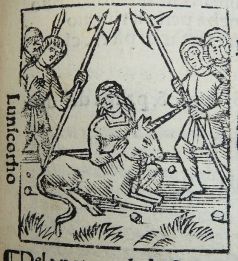 So, the Greeks called the unicorn a rhinoceros, but he certainly wasn’t a rhino as we know them now. He sounds more like a small, one-horned goat. Which is not how we imagine rhinos or unicorns. To us, the unicorn is a beautiful white horse, slender and magnificent, with that graceful all-important horn. In the medieval period, he was definitely depicted as a goatlike creature that paid dearly for trusting virgins. 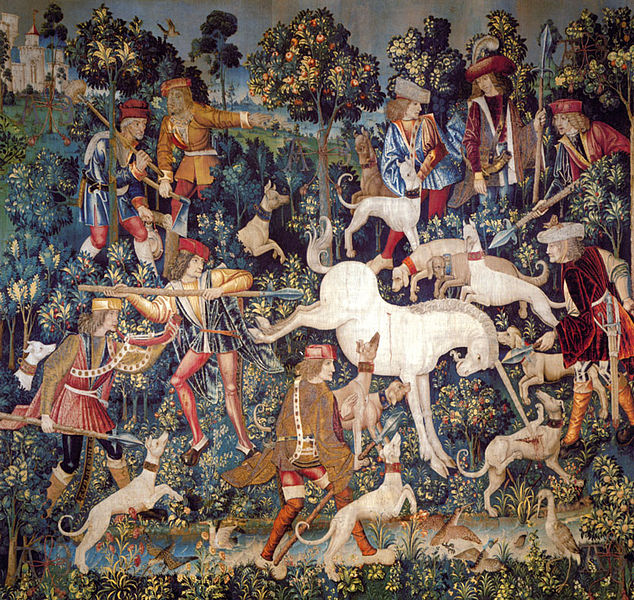 Above, in “The Unicorn Defends Itself “(Cloisters Museum), 1495-1505, the unicorn is beginning to resemble a horse, albeit still with cloven hooves and a goat’s beard. He cannot be brought down by spears and arrows alone; it requires hounds to finish him off. And before he succumbs, he finishes off one of the hounds with his deadly horn. 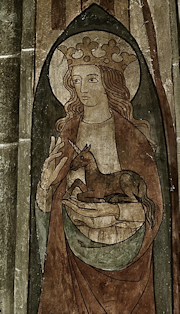 The story of the unicorn being irresistibly drawn to maidens was widespread, and there are countless illustrations, first with young girls, but gradually with the Virgin Mary, which became awkward for the Church, leading to the Council of Trent (1545-63) drawing up strict guidelines. The unicorn had fallen foul of the rules, and thus fell out of favour too. But it is all imagination, because the unicorn did not exist. Did it?

To learn much more, I recommend an excellent book entitled The Natural History of Unicorns by Chris Lavers, which traces the evolution of the unicorn legend and its allegorical symbolism.