On Friday 13th June 1483 Cardinal Morton, along with others, was arrested at the Tower of London.  It is well documented the role Morton played in the downfall of Richard lll.  Morton was Richard’s arch enemy and his deviousness, cunning and powers of manipulation being  well known,  there is no need to go into them here in detail,  only to recap briefly on his enforced stay at Brecknock castle where he latched on to the flawed Buckingham’s shallow and vainglorious character (what were you thinking of Richard?!)  inveigling him to rebel and  desert Richard, a  result of the ensuing rebellion being that Buckingham was swiftly defeated,  captured and ignominiously executed, while he, Morton, legged it to the Fens and his ‘see of Ely, where he found both money and friends’ (1)   It should be noted that Margaret Beaufort’s estate at Collyweston was but  a short distance of 40 miles  from Ely.     Morton then  ‘sailed into  Flanders, where he remained,   doing good service to the the  Earl of Richmond until the scheme at Brecknock had been realised and the Earl had become king of England’ (2 ).  As Bishop of Ely Morton would have been very conscious of the sanctity of the Coronation ceremony  but this did in no way deter him from playing a prominent role in the betrayal of King Richard.  How he came to terms with his treachery is difficult to understand,  and is of course something we will never know,  but manage he did somehow and the rest is history.

His achievements are likewise well known and numerous,  including “Tudor” promoting him to the see of Canterbury and  Lord Chancellor in 1487,  eventually prevailing on the Pope to make him a cardinal  , the conceiving of the infamous Morton’s Fork – although to be fair some attribute this to Bishop Fox (3) – and his patronage of the young Thomas More who served in his household as a page.  Morton was without doubt an enormous influence in poisoning the young More against Richard.  More  later went on to write his ‘History’ which has proven to be extremely  damaging to Richard’s memory as it is oft quoted by ‘historians’ who should know better.  It is believed by some that it was in fact Morton who was the original  author including the late Professor A F  Pollard who opined Morton wrote a latin version which More translated later  into English (4).

It is easy to imagine, as he lay dying, after achieving what was a good age in those harsh times, that Morton felt rather pleased with himself for had he not been instrumental in achieving practically the impossible?..the slaughter of a rightful king and replacing him with someone with very tenuous claims to the throne.  He had already made elaborate plans for where he wanted to be buried.in the Chapel of our Lady in the crypt of Canterbury Cathedral beneath the pavement of the western bay.

Which translates as he  had chosen for his burial ‘not an ostentatious place but rather a secret one with a simple marble cover before an image of the most blessed Virgin Mary., whom he held in very high esteem and where his most fortunate body might rest in peace’

A splendid  altar tomb/cenotaph  was built nearby which incorporated Morton’s rebus of a bird (a mort) and a barrel (a tun), and the Tudor badges of  portcullis and rose.  And here he was laid to rest. 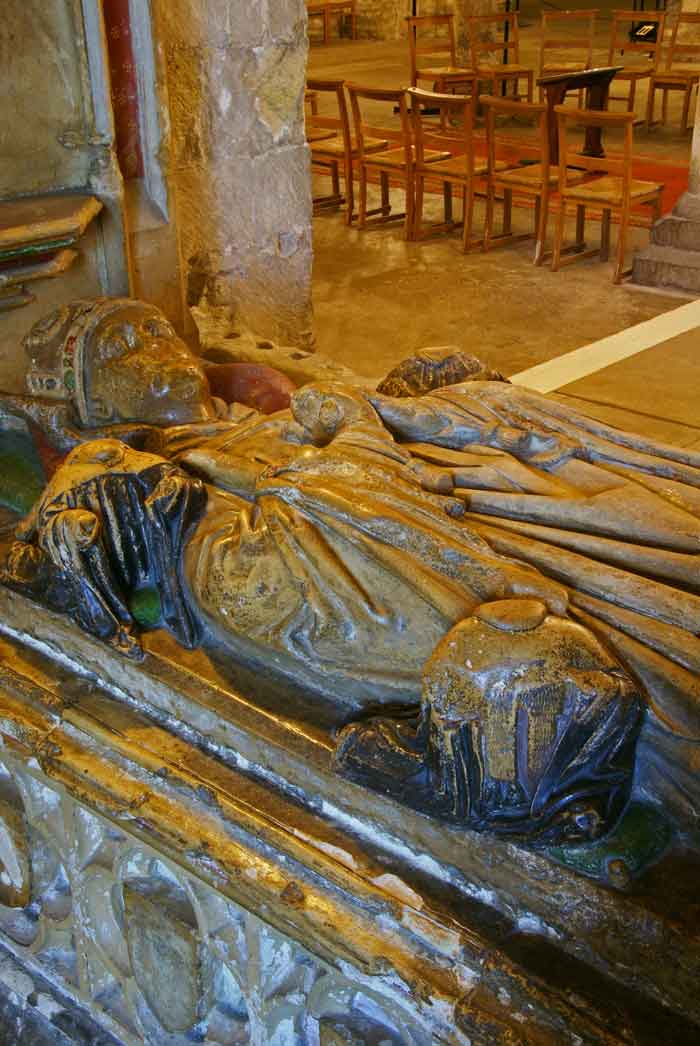 Alabaster figure of Morton on his tomb/cenotaph

However, this is where his plans finally went awry.   The crypt became a ‘repository for scaffolding poles and building material, and rendered unfit for sacred purposes’ (6)

The slab covering the tomb was eventually broken and smashed and the remains in their cere cloth  revealed   Over a period of time these were gradually stolen until none were left except his skull which a Ralph Sheldon rescued in 1670 leaving it to his niece on  his death.    Eventually the head  found a final resting place  at Stonyhurst College, where  it still is to this very day.  The head was  recently loaned to an exhibition on the life of  Thomas More in Washington DC (7).   It is both ironic and just that the king that Morton callously betrayed,  and whose remains were given a cut-price burial in Leicester,  have now been reburied with the honour that he deserved,  while all that remains of Morton is his head in a box in a cupboard.   As they say man makes plans and the Gods laugh…

As a footnote to this story in my delving around I think I may have come across a ‘secret’ portrait of Morton in the wonderful medieval windows of St Mary’s Church, Fairford, Gloucestershire.  These windows have survived it is believed because they show hidden portraits of the Tudor royal family and important members of Henry Vll’s court.  One portrait is described as being that of Wolsey…but I believe this is erroneous..why would Wolsey’s portrait being included with those of Henry Vll and his family including Henry Vlll as a child.  I have since compared it with that of the wooden bosses thought to represent Morton at Bere Regis Church.  I show them here for comparison.  Any thoughts?

The portrait in the nave of St Mary’s Church described as being of Wolsey? But could it possibly be Morton?

One of the bosses on the roof of Bere Regis Church thought to represent Morton for comparison.

(5) C Eveleigh Woodruff.M.A. The Chapel of our Lady in the Crypt of Canterbury Cathedral p. 158.

(7) I am most grateful for this information kindly given to me by Mr J Reed,  Assistant Curator of the  College Collections and Museum by the Association, Stonyhurst College.