Was the condemnation of George of Clarence a significant example of the abuse of attainder?…. 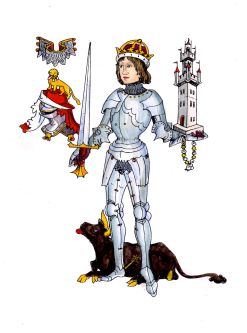 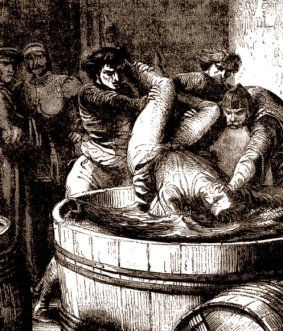 The following is an extract from ‘His Grace the Steward and the Trial of Peers’, by L.W. Vernon Harcourt.

“The proceedings in the parliament of 1477 against George, Duke of Clarence, afford us with a significant example of the abuse of attainder. Either attainder in this case was unnecessary and therefore improper, or it was resorted to for the purpose of bolstering up the judgment in an irregular trial. I have not discovered any evidence that Clarence was formally indicted, but he appears to have been arrested at Westminster, in the presence of the mayor and aldermen of the city of London, on a charge of treason made by the king himself in a verbose and not very dignified speech.1

“In the ensuing parliament Clarence was arraigned: the king, according to the continuator of the Croyland Chronicle, prosecuted in person: no one ventured to reply but the prisoner. (This last seems a somewhat unintelligent observation.) Certain persons were brought in by the crown, presumably as witnesses, but from their conduct at the trial many thought they were there to formulate accusations.2 Clarence denied the charges, but the bill of attainder was passed by the lords and commons and received the royal assent.3

“The Duke of Buckingham was appointed steward of England to pass sentence,4 but execution was for some little time delayed: it was, to be sure, only seemly that the king should exhibit some reluctance about putting his own brother to death.

“The commons finally paid a visit to the upper house and requested by their speaker that the matter might be brought to a conclusion.5 Shortly after, Clarence was done to death. The manner of his dying was never made public; but the story of the wine-butt has at least the merit of being strictly contemporary gossip.6”

So, now the questions. Was the attainder of George of Clarence, the brother between Edward IV and Richard III, improper/irregular enough to be questionable in law? Was the court packed with false witnesses? Did Edward have so little real evidence against George that he had to bend the rules? The king had his way back then, of course, but in the present day, could a good lawyer present a convincing case for a mistrial? George might still be attainted and condemned in a second trial, but Edward would have to take more care. And, who knows, he might even have second thoughts about committing fratricide.

And finally, if the original trial was sufficiently improper/irregular, and therefore not lawful, would it mean that Clarence’s son, Edward, Earl of Warwick, was the rightful and legal heir of Edward IV, not Richard, Duke of Gloucester?

I do not believe for a moment that Richard thought any such thing. He saw himself as the rightful king and acted accordingly. In good faith. But L.W. Vernon Harcourt has made me think.

Postscript 26th April 2017: I am adding this because it suggests to me that L.W. Harcourt Vernon is correct to question the legality of George’s trial, because the Commons thought so too. In Judicature in Parlement by Henry Elsyng, Clerk of the Parliaments, I found the following. (Apologies for the Latin, which I can only vaguely follow, but the paragraph that follows it more or less explains.

“Here let us examine, for what illegall proceeding the Commons required this cause to be herde agayne. The author says, none argued against the Duke but the Kinge. This the commons helde to be against Lawe, That the Kinge Himselfe shoulde enforce either Article or Testimonye against a delinquent in a Capitall cause: for yt is inconvenient, that He, whoe is to have the fortfeiture of lyfe, Landes and goods should be accuser, wyttness or Judge. The Commons were present at this Tryall, and considering of the Inconvenience herof, they retourned & made this request, ut supram.

“[1] The ‘book’ was Ingulph’s Chronicle and its continuations (B.L., Ms. Cotton Otho B. XIII). The editor is grateful to Colin Tite for this identification. This manuscript was severely burned in the fire of 1731. We now have available a text based on another manuscript of the Chronicle, formerly owned by Sir John Marsham. This text was included by William Fulman in Volume I of Rerum Anglicarum Scrip;torum Veterum, printed in 1684. The modern edition (Henry T. Riley, ed., Ingulph’s Chronicle and Its Continuations, 1908) is based upon it.”

12 thoughts on “Was the condemnation of George of Clarence a significant example of the abuse of attainder?….”