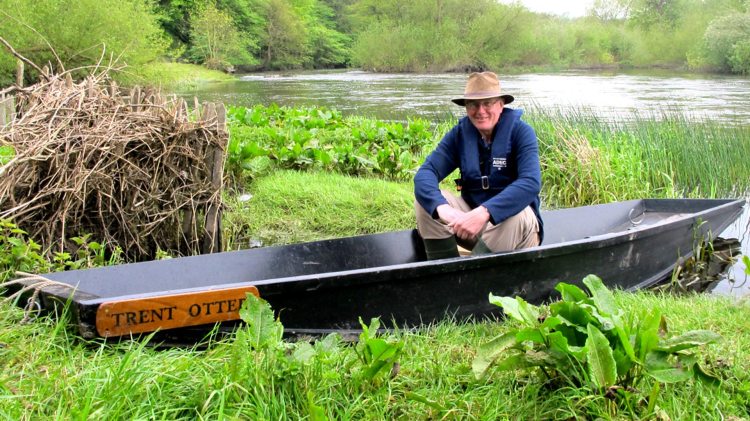 Oh, the penalty of working my way through the documentaries available on BBC iPlayer! I keep finding little nuggets of Ricardian interest. Tonight I chose “Crossing England in a Punt: River of Dreams”, the title of which is rather self-explanatory. Explorer Tom Fort punts his way from the birth of the River Trent in Staffordshire to its mouth in the Humber Estuary. Imagine how I sat up when right at the beginning, in the trailer, I spotted a portrait of Henry Tudor . What had he to do with the Trent, I wondered?

Then – ha! Of course. The Trent passes the site of Stoke Field, 1487, when the Earl of Lincoln’s Yorkists were defeated by Henry’s forces. Well, by the Earl of Oxford, actually, Henry didn’t arrive until it was virtually over.

The programme commenced, and was very enjoyable and interesting, but you can imagine how I was filled with eager anticipation when mention was made of Staythorpe Power Station. The Yorkist rebels under John de la Pole, Earl of Lincoln, and the banners of the so-called Lambert Simnel, were believed to have camped at Staythorpe before the battle, crossing the Trent in the early morning. Surely Tom Fort would mention the battle? After all, he’d mentioned Bonnie Prince Charlie and the Vikings. But no, not a word.

Hope faded as the punt moved on downstream, and I decided that Stoke Field was going to be overlooked. Then, suddenly, there it was. A large chunk of the programme was devoted to the story of the battle, with views over the field. We were shown where the Yorkists took up their positions along a low hill that stretched above the riverbank. When defeat was inevitable, the fleeing Yorkists were so crammed into a gully, pursued by the merciless enemy, that the place ran with blood and is still known as the Red Gutter. Mr Fort didn’t mention Francis Lovell, who is is said to have escaped by swimming his horse across the Trent. Nor the Earl of Lincoln, who was slain in the battle. It is said that Henry had him buried ignominiously and anonymously under a willow tree, with a willow stave through his heart.

So, my friends, if you want to sit in your armchairs and see where the last battle of the Wars of the Roses took place, go to iPlayer and take a look at this documentary. Tom Fort’s words were that it was where the White Rose of York had one final throw of the dice.

Several years ago, when I was researching for chapters of a book that concerned the battle of Stoke Field, I learned that the spring and area of the willow trees where Lincoln, his Landsknecht commander and others were buried so unceremoniously, has now been destroyed to make way for the new A46. There are still pictures of the spring, just before it vanished forever.

For further information about the battle and the area where it took place, the following links are useful:-