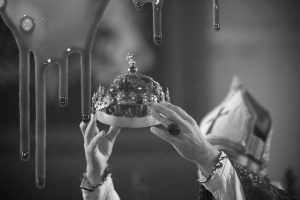 As this excellent article reminds us, there were eight pre-union Stewart monarchs, or nine if you exclude James VI, who had already reigned in Scotland for nearly forty years before inheriting the English throne. Of these, excepting the two Roberts, only two turned up for a pitched battle with against an English army and only one was actually killed by English troops and the other by accident. A third delegated his fighting duties, although he was quite ill and died within three weeks. Two of them managed to be killed by fellow Scots and another lived in exile in England for twenty years before being beheaded for frequent plotting.

The strangest thing is that, throughout this period, the Scots throne always passed that monarch’s heir, whether six days old or fifteen and no matter in what circumstances they died. One of them, James I, married Richard III’s apparent cousin, James IV married his great-niece and Mary died at his birthplace.