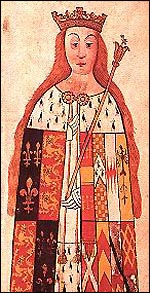 Queen Anne Neville from the Salisbury Roll.  Anne’s mantle equates her ancestorial arms with those of England and France.

After Anne Neville’s death on the 16th March 1485 , she was given a magnificent funeral in Westminster Abbey ‘with honours no less than befitted the burial of a queen’ (1).

Those  wishing to visit the Abbey to pay their respects at her grave will be unable to find it, although the general location is known.  The Westminster sacrist’s accounts record the payment of ₤42.12 for her burial but there are no accounts of the funeral or any monument.  The Great Chronicle of London, written in the 1530s records that Anne was buried south of the high alter ‘by the South dore that does ledyth Into Seynt Edwardys Chapell’.  A late 16th century list of Westminster burials also records her burial on the south side of the Sanctuary.  According to Stow,  Anne was buried  south of the Westminster Vestry while Crull claimed her grave stood in the south choir aisle (2).

A leaden coffin was discovered in 1866 south of the high altar but was not disturbed (4). However it is  unclear whether this was Anne’s coffin or that of another queen Anne, Anne of Cleves.

in 1960 an enamelled shield of arms  with a brass plate was placed on the wall of the south ambulatory as near to the grave site as possible, by the Richard lll Society.    The brass plate is  inscribed with the words ANNE NEVILL 1456-1485 QUEEN OF ENGLAND YOUNGER DAUGHTER OF RICHARD EARL OF WARWICK CALLED THE KINGMAKER WIFE TO THE LAST PLANTAGENET KING RICHARD lll   ‘In person she was seemly, amiable and beauteous and according to the interpretation of her name Anne full gracious’ REQUIESCAT IN PACE.

The quotation is taken from the Rous Roll.

Anne from the Rous Roll.

Maybe it will be a comfort to those that travel to Westminster Abbey  only to find they cannot find Anne’s  grave to contemplate  that the inibility to trace it  may  have saved Anne’s mortal remains from  the desecration and  resulting loss that befell the remains of her sister, Isobel Duchess of Clarence and her sister-in-law, Elizabeth Wydeville .

10 thoughts on “QUEEN ANNE NEVILL – HER BURIAL IN WESTMINSTER ABBEY”