You may have read here, here, here or even here about the regular own goals of a certain “Tudor”-ist tr 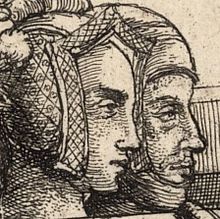 Anyway, given the fact that Henry VII, whether Tudor, Beaufort or Swynford, is not descended from Blanche, Duchess of Lancaster in suo jure but from her husband’s mistress and later wife, Katherine de Roet, he wasn’t a true lineal Lancastrian. Carson has listed thirty individuals, some mentioned here, who were alive on 22 August 1485 and were descended from Blanche, therefore having better claims than Henry.

Now duRose mentions that Henry VII was descended from Blanche’s paternal aunt, therefore he was a lineal Lancastrian. This is actually true but very counter-productive. As you can see below, Blanche had no brothers but an elder sister, whose only child died in infancy. Her father, Henry of Grosmont, had no brothers but five sisters, one of whom was a prioress but the other four all had issue and descendants alive in 1485.

You can see quite clearly that Henry’s ancestress was Mary, the youngest of the quintet. Eleanor, the fourth sister, leads to Richard III et al whilst there are three lines to John Howard, Duke of Norfolk and a lot of other famous people are listed.

Here is the evidence that there are now HUNDREDS of people with a better lineal Lancastrian claim than Henry VII in 1485.