Before the English Reformation, Archbishops were often related to the King, a spare brother from a branch of the Royal family. There were commoners, increasingly so as the years went on. Then the Reformation ensured that the clergy were no longer required to be celibate.

Focussing particularly on the province of Canterbury, there have been three Archbishops of clear Royal descent since 1536:
1) Reginald, Cardinal Pole (1500-58) – a great-nephew of Richard III and a Catholic who was 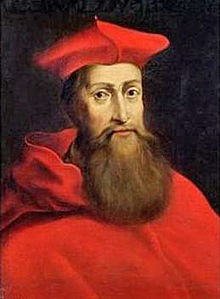 from Anne of Exeter, he was the grandson of the 3rd Duke of Rutland and served from 1805.
3) Justin Welby (1956-) – has been Archbishop since 2013 and was previously thought to be the first incumbent of partial Jewish descent. Earlier this month we learned, through a Charles Moore article following a DNA test, that his biological father was Anthony Montague Browne, a descendant of James I and Joan, traditionally surnamed Beaufort. Ironically, the paternity of Joan’s father is now at issue and she may have been a Swynford.

Subject to that question, this trio of primates would have Edward III as a common ancestor

7 thoughts on “Of well-connected Archbishops”