We tend to think of anything relating to Richard  III prior to the last  forty years to be biased towards traditional views, with the exceptions of Josephine Tey’s novel, Paul Murray Kendall’s biography, a few other novels like Patrick Carlton’s Under the Hog, and the early  ‘defenders’ such as Buck, Markham and Halsted. Children’s books in particular seem to tow the Shakespearean line, with illustrations of shadowy, black clad, limping uncles menacing angelic golden haired children depicted as little more than toddlers. Royal Children of English History  by  famous author E. Nesbit was one of these, containing not only the More-inspired story of the princes finished by a line  that went something like ‘he (Richard) was killed at Bosworth by a much better man, as he throughly deserved.’ (She seemed unaware that Henry Tudor placed a young child, Edward of Warwick, into the Tower shortly thereafter. There were also references to ‘the great Henry VIII’ and a story that made Edward of Lancaster seem to be a young child going into battle rather than a young man).

However, there were exceptions:  in the 1950’s a softcover book for children appeared Mediaeval Britain Told in Pictures by C.W. Aime. This book covered the medieval era  but used the medium of art rather than text, with the drawing based of portraits and illustrations of the day. We see pilgrimages and we see the burning of Lollards (older kids’ books tenders NOT to skirt around such things) and we have the wedding of Henry VI to Margaret of Anjou, an armoured Richard Duke of York…and even the  murder of Edmund of Rutland at Wakefield (who tends to get forgotten in favour of Edward of Lancaster.) Sopeaking of which, the book goes on then to illustrated Edward IV’s reign including a scene in which  the King strikes Edward of Lancaster who is then murdered by his men.

This is where it gets interesting. Under the caption there is no mention of Richard having any involvement at all, despite the overwhelming Shakespearean influence of the time. The blame seems to be laid firmly at Edward’s door. The next page features drawings of both Edward V and Richard III and facsimiles of their signatures…and not a mention of  murders in the Tower, hunchbacks,  smothering, dolorous babes or usurpation.

Instead at the bottom of the page is a very interesting comment : ‘The brief reigns of Edward V (1483) and Richard III (1483-1485) are important chiefly as transition periods introducing the Tudor Despotism.’

An unusual opinion in that particular era especially in a book primarily intended for children–but certainly a refreshing one. 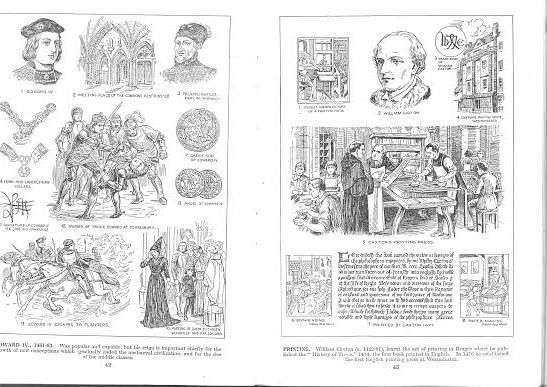 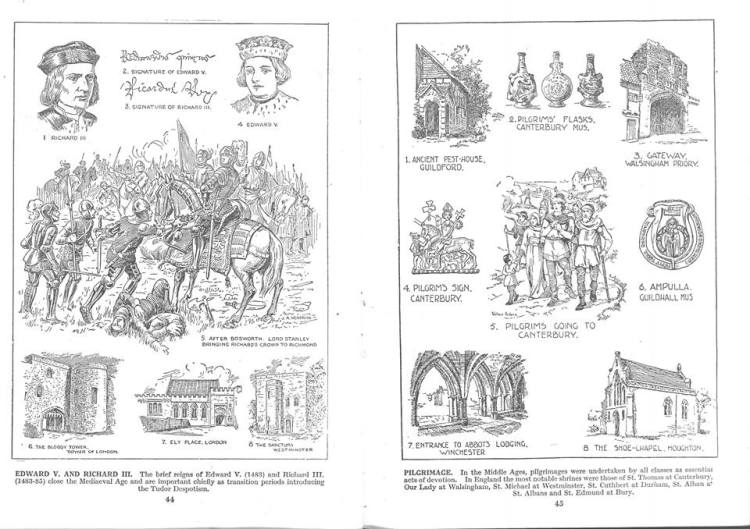