December 28th was the Feast of the Innocents, commemorating the day in which Herod slaughtered  young male children in an attempt to kill the newborn Christ-child. In medieval England it was an important feast day and also part of the ‘Feast of Fools’. In many towns and cities over the festive season the church authority was supplanted by ‘Boy Bishops’ (there was traditionally one at Salisbury near my home) and the Feast of the Innocents was the last day in which the Boy Bishop held sway– on this day too, the words of children were to be heeded above those of adults.

In this short Christmas story, FEAST OF THE INNOCENTS, Richard III (here still Duke of Gloucester) is depicted with his son, Edward of Middleham, who died young in 1484. Edward gets very little ‘airtime’ in Ricardian fiction, other than to be born to great rejoicing, then to be sickly but much loved, then to tragically die. This is wholly understandable, as so little is known about him; even his birthdate is questionable, ranging between 1473 and 1476. He is almost always depicted as sickly, and he has some health issues in this short tale too, but there is no real proof that he was particularly ailing, although it may be suggestive that he was taken by chariot (carriage) to York for his investiture and did not seem to have been at his father’s coronation or to have travelled much outside Middleham. Of course if he was perhaps born in 1476 or even later, this might be more understandable.

In Feast of the Innocents Edward is given a ‘voice’ and a little adventure in a snowstorm that sweeps in over the Dales. All fantasy and speculation of course, but using the evocative and beautiful landscapes of Wensleydale and Coverdale,and real places that Richard (and young Edward) would have known in life. A Christmas feast is also described at Middleham castle, based on the actual procedures of table laying and manners known to have taken place in Richard’s era.

The title itself of course is slightly provocative because of Richard’s ‘reputation’ regarding the disappearance of the ‘Princes in the Tower’ and their presumed (and it is certainly unproven) murder ,with some traditionalists having drawn parallels with  King Herod killing boy babies that threatened his realm. In this story, it attempts to show what Shakespeare completely obliterated and many writers of the era ignored (save for the one mention that Richard and Anne were nearly mad with grief when Edward died); that Richard was a father, who undoubtably cared for his child and had the same feelings as emotions as anyone else. I think, in fact, one of the great disservices Shakespeare did to Richard (and there were many) was to make him childless, a barren unloved and unloving creature, completely inured to human kindness. 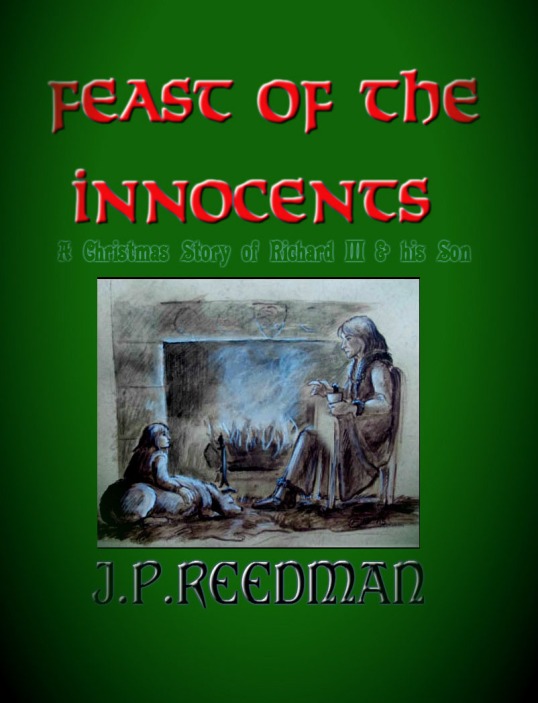 2 thoughts on “FEAST OF THE INNOCENTS: Ricardian Christmas Fiction”