In the heart of the City of London stands the medieval Guildhall. Built between 1411 and 1440 on the site of a much older structure, for the most part it survived the Great Fire of London, and still dominates the square in which it stands, a true relic of the London of Richard’s day.

Legend has it that the palace of Britain’s first king, Brutus of Troy, stood on this spot, and the hall itself is graced by two wooden giants Gog and Magog, who are also mythical guardians of London—there were carvings of this pair here at an early date but the ones towering above the hall today date only from 1706, the earlier pair having been destroyed in the Great Fire.

Many notable events have taken place within the Guildhall, including a number of famous Tudor era trials including Thomas Howard, Thomas Cranmer, martyr Anne Askew, Lady Jane Grey and her husband Guilford Dudley, and the lovers of Queen Katherine Howard, Thomas Culpeper and Francis Dereham.

It was here too that Henry Stafford, Duke of Buckingham came on June 24, 1483, Midsummer’s Eve, to deliver before the mayor and other important persons, a speech in support of Richard III’s assumption of the Crown. He was supposed to have delivered an amazing oratory in which he condemned the Woodvilles and mentioned that the ruling of a country was not fitting for a child. Apparently, he spoke so suavely and convincingly, with such fluid ease, that he ‘did not even pause to spit’ between his sentences.

At the end of the impassioned speech, however, it was claimed by certain writers that he was greeted by stony silence. However, we have no way of knowing how true this is, or whether it was simply added in by hostile sources—knowing the determination and forthrightness of medieval Londoners, if they had not approved even in a small way, it would be surprising if no protest was registered. It was not as if either Richard or Buckingham had huge contingents of men in London at the time to intimidate them into agreement. Of course, silence, if indeed silence
there was, could have come merely from surprise and the gravity of what the Duke was suggesting. At any rate, minutes later Buckingham’s entourage reportedly hurled their hats in the air and cried, ‘King Richard! King Richard!’
The Guildhall is well worth a visit and is open most weekdays, though it is best to check on the website as it can close at short notice for functions. Its entrance is directly opposite that of the adjoining Art Gallery (which is also well worth a visit, especially the Roman Amphitheatre,which was once the largest in all Britain.) 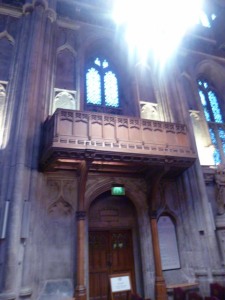