A Chivalrous Plantagenet Tradition, Discontinued by the Tudors

The Order of the Garter is the most senior and the oldest British Order of Chivalry and was founded by Edward III in 1348. (http://www.royal.gov.uk) Its 25 members include the Sovereign and 24 “knights-companion” who have contributed in a particular way to national life or who have served the Sovereign personally. When it was founded by Edward III, however, it stood for something more mythical and political.

According to the website of the College of St. George in Windsor: “In 1344 Edward III made a spectacular demonstration of his interest in Arthurian legend during a massive joust at Windsor. On this occasion he promised to renew King Arthur’s celebrated fraternity of knights, the Round Table, with its complement of 300 men. Work even began on a gigantic circular building two-hundred feet across within the upper ward of the castle to house this so-called Order of the Round Table. The renewal of war with France intervened with this project but in 1348 it was revived in a different guise. When founding the new college of St George at Windsor Edward III associated with it a small group of knights, each of whom was provided with a stall in the chapel. This comprised twenty-five men in all with the king at their head and was entitled the Order of the Garter after the symbol of the garter worn by its members.”

“The use of what seems – to modern sensibilities – such a curious emblem has given rise to a popular legend about the foundation of the order. According to this, the Countess of Salisbury lost her garter during a court ball at Calais and Edward III retrieved it, rebuking those who had mocked her embarrassment with the words ‘Honi soit qui mal y pense’ – shame on him who thinks evil of it – But this phrase, the motto of the order, actually refers to the king’s claim to the French throne, a claim which the Knights of the Garter were created to help prosecute. As to the emblem of the Garter, it may perhaps less interestingly, derive from the straps used to fasten plates of armor.” (http://www.stgeorges-windsor.org/about-st-georges/history/the-order-of-the-garter.html) 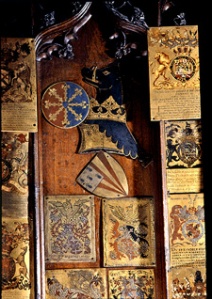 One of the traditions started by Edward III was the summoning of women to be “ladies of the Garter” – not on the same footing as the male companion knights, but an honorary achievement by such ladies that gifted them with a Garter robe and permission to wear a Garter ribbon around their left arm. These always included the Queen Consort, and usually the wives of the Sovereign’s male sons. However, other highly-ranked peeresses of the kingdom were invited too. The first female to be admitted in this fashion was Edward III’s queen, Philippa, in 1358. No doubt, the placement of women within this prestigious order was symbolic of the extension of chivalric concepts to “gentle ladies”.

In total, 67 women were summoned to the Order of the Garter during the following 127 years of the Plantagenet dynasty, a tradition adopted by both the Houses of Lancaster and York. (http://www.heraldica.org/topics/orders/wom-kn.htm) John of Gaunt’s second and third wives, Constance of Castile and Katherine Swynford, were inducted in 1378 and 1387 respectively. Bolingbroke’s first wife, Mary de Bohun, was inducted in 1388 and his queen Joanne of Navarre in 1408. Henry V’s consort, Katherine of Valois, appears to have been summoned to the Order prior to her coronation.

(The effigy of Alice Chaucer, Duchess of Suffolk, d. 1475, showing a Garter Ribbon on her left forearm.  Photo from http://www.astoft.co.uk/oxon/ewelmechurch.htm.)

Yorkist women joined the ranks of “lady companions”. Both of Edmund of Langley’s wives (Isabella of Castile and Joan Holland) were inducted, in 1378 and 1399, as well as Philippa de Mohun, the wife of his son Edward, second Duke of York, in 1408. The year 1399 also saw the summoning of Joan Beaufort, Countess of Westmoreland (and mother of Cecily Neville) to the Order. In 1432, Isabel, Countess of Warwick, was created a Garter lady companion, and was to become maternal grandmother to Anne Neville, Richard III’s queen.

Edward IV summoned 6 women as ladies of the Garter, almost all of them during his “second” reign (1471-1483). In 1477, his wife-consort Queen Elizabeth, daughter Princess Elizabeth, and sister Elizabeth de la Pole, the Duchess of Suffolk, were admitted. Two more daughters, the Princesses Cecily and Mary, were inducted in 1480.

Although Richard III made 7 men knight-companions of the Garter*, his short reign did not include the summoning of any ladies. Nor did it include creating his own son, Edward, Prince of Wales, as a Garter knight-companion. This is most certainly due to the fact that his son and queen died not very long after his accession to the throne, and his 26-month long reign was cut short by his defeat and death at Bosworth. The average length of time between a queen-consort’s coronation and her admission to the Order of the Garter was 3.6 years. It would be fair to say that had Richard III retained the throne, he would have eventually followed his ancestors’ and brother’s tradition of inviting his consort and female children to it.

This tradition, however, was soon discontinued in the following Tudor dynasty. Henry VII made only one summons of a lady companion to the Garter, and that was his mother, Margaret Beaufort, in 1488. It is unclear whether his daughters (Margaret or Mary) received Garter robes, but an archivist at The College of St. George contends they did.  (Dr Clare Rider – http://www.stgeorges-windsor.org/archives/archive-features/image-of-the-month/title1/Ladies-of-the-Garter-Image-of-the-month.html)  In any case, it is undisputed that the Tudor dynasty did not sustain the Plantagenet tradition of summoning ladies, as it would take another 513 years for the Order of the Garter to see its next Lady Companion when Edward VII summoned Queen Alexandra in 1901.

Thus, we may say that a Plantagenet tradition of chivalry was soon to die following the Battle of Bosworth in 1485.

(Image of Stallplates and Garter Ribbon from the website of the College of St. George; see link, above.)

Posted by white lily in Uncategorized and tagged chivalry, Edward III, Ladies of the Garter, Order of the Garter

11 thoughts on “A Chivalrous Plantagenet Tradition, Discontinued by the Tudors”