Bringing up the Saffron

His dwelling made trim,

look shortly for him.

When harvest is gone,

then saffron comes on.

A little of ground,

The history of saffron, that exotic spice of the Levant, spans three millennia, landing in England some time in the mid-14th century – although certainly there are hints of its somewhat limited existence before that found in the household accounts of nobility.  In 1240, physician Gilbert of England mentions it as an aid in mental illness.  (Today there is ongoing research into saffron as a source of helping in depression which the early 17th century herbalist, Nicholas Culpeper, may have dourly acknowledged in his admonition that saffron caused “some to have fallen into an immoderate convulsive laughter which ended in death”.)  There is a legend that sometime during the reign of Edward the Third, a pilgrim returning to Essex from the Middle East brought a Crocus bulb (the source of saffron) hidden in his staff thus starting the saffron industry.  In truth, it probably was returning Crusaders from Asia Minor who introduced saffron to the upper classes who, in turn, encouraged its cultivation in England, primarily Essex and Norfolk.  And just in time to benefit the population devastated by the Black Death in 1348 and during its re-ocurrence thirty-three years later.  Its medicinal qualities (such as it was thought) included halting hemorrhages, vomiting and headache while guarding against colic, cough and scabies.  In other words, a myriad of claims that is often made about most herbs and spices – today as well as in the medieval period.  In actuality, it was often used as a dye in the wool trade and as a bright paint for illustrations of religious texts and murals.  According to Essex saffron farmer, David Smale, England was the largest producer of saffron during the medieval period.

Saffron is the stigma of the Crocus – not the springtime harbinger of better times and weather but, instead, of the autumn flower.  Called Crocus sativus Linnaeus, it is a descendent of the wildflower Crocus cartwrightianus.   Thought to have originated in Persia, its brilliant red-orange stigmas were not only used in paint and medicine but also food coloration and for its pungent flavor and hay-like aroma.  And no one was more color or flavor conscious than the noble classes and royalty of medieval England!  The amount of stigma (or the less prized white styles) that must be collected to make even a small amount of saffron has made it the costliest spice in the world.  The most recent estimate is that it takes over 200,000 crocus flowers to obtain 450 grams of saffron.  Today, several farmers in Essex (particularly the market town aptly named Saffron Walden) and Norfolk are reintroducing this fascinating spice into their landscape but because of cost and labor, one gram (0.035 ounces) sells for 75 pounds.  Just a brief scroll through Amazon.com to see the prices of the finest saffron of Iran and Spain is enough to make one clutch the wallet a little tighter. 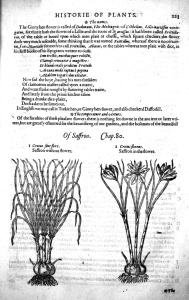 In challenging the belief that saffron was introduced to England in the 14th century, we have the 13th century accounts book of Eleanor, Countess of Leicester (Eleanor Plantagenet), the wife of Simon de Montfort, 6th Earl of Leicester.  Her immense household (centered at Dover Castle) purchased modest amounts of the spice – only one pound at a time as compared to six of cinnamon.  She paid between 10s. and 14s. a pound for saffron while spices such as pepper and ginger were purchased for much less.  A little bit of saffron goes a long way and one can’t help but wonder whether her husband, de Montfort, had not developed a taste for the strong-tasting strands of gold while enjoying his rice pilafs during his two crusades to Syria and the Holy Land.  If the de Montfort family saffron was not purchased in England, it is likely that it would have been imported from Spain and Venice – two top importers during this period.

Sadly, the interest in saffron began to wane in the 18th century in Great Britain when sweet flavors such as vanilla began to supplant the somewhat bitter saffron.  Nonetheless, it still has its place in English cookery and I include a link to the famous Cornish Saffron Cake (or bun) for those cooks who tire of throwing a few precious strands of sunburst into the rice while cooking up their Chicken Tikka Masala and might prefer something a little bit more cozy.  As always, the BBC includes the Imperial measurements for us benighted types.

And here is a medieval recipe for mulled wine borrowed from “Fabulous Feasts: Medieval Cookery and Ceremony” by Madeleine Pelner Cosman.  Perfect for a simple holiday meal for 300 guests:

2 Gallons of Wine or Ale

Plus: 3 pounds of Almond

Mix these in a gigantic medieval pot.  Heat for ten minutes and then strew powdered ginger on the surface. 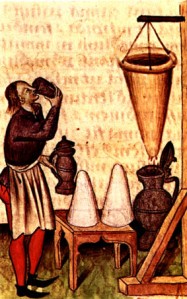 Spices, Salt and Aromatics in the English Kitchen, Elizabeth David

5 thoughts on “Bringing up the Saffron”