At last, Richard gets a smidgeon of the Renaissance credit he’s due…. 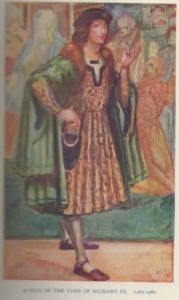 English Costume from William I to George IV by Dion Clayton Calthrop, published 1937.

I have just received this book, and of course turned immediately to the reign of Richard III. Dismay promptly ensued. Hump-backed Richard! Oh, natch. Then: “The axe of the executioner soiled many white shirts, and dreadful forebodings fluttered the dovecots of high-hennined ladies.” Really? Sez who?

Richard’s death, predictably, means the burial of winter, while Henry VII’s reign heralds the first day of spring. Oh, my, how things had changed when the Tudors’ very own ‘Winter King’ finally turned up his blunt toes. Off we went again, declaring that the winter years were over and a new spring had begun. Erm, with Henry VIII? If ever dovecotes should have been fluttering with dreadful foreboding, this was the time. My, my, we never did learn, it seems.

But not even this biased tome can condemn Richard entirely, although it must have galled the author to concede it:

“It is in the reign of Richard III that we get, for the men, a hint of the peculiar magnificence of the first years of the 16th century; we get the first flush of those wonderful patterns which are used by Memling and Holbein, those variations of the pineapple pattern, and of that peculiar convention which is traceable in the outline of the [hrumph!] Tudor rose.”

So Henry doesn’t get the credit. And about time too! The first buds of the Renaissance did not appear after Bosworth, but before it, when Richard was king!  What a wonderfully enlightened realm England would have been if the last Plantagenet had been given the chance to prove it.

4 thoughts on “At last, Richard gets a smidgeon of the Renaissance credit he’s due….”