It was my privilege to interview Riikka Nikko, one of the youngest and most gifted artists on the Ricardian scene today.  Her work, Ricardian and otherwise, can be found in newspapers, magazines, book covers and throughout social media and the internet.  In particular, her depictions of King Richard the Third express an emotional charge that is as exciting as it is dramatically appealing.  The king is often arrayed in glorious raiment of scarlet, ebony and plush royal blue, his golden collar slung across his shoulders, his beloved crown clasped in his gauntleted hands .  A  handsome, rugged prince straight out of a children’s fairy tale.

Riikka was born in 1988 in a village called Kauhava which is located in the South-Ostrobothnian region of western Finland.  As soon as she was out of high school, she applied to the Nordic Art School in the town of Kokkola.  There, she received a multifaceted education that was primarily due to the excellent teaching staff that came from all around the globe.  After Kokkola, she applied to the Kankaanpää Art School.  This institution, which is designed to train and educate professional artists, has a campus which features a spectacular modern glass façade and from where she learned to master all possible forms of art.  She studied there from 2010 to 2014.  Riikka recently agreed to an interview with the Murrey and Blue:

You seem very young to be such a successful artist.

Making art has always been my goal in life.  When I was little and my mother gave me a pen and pencil I knew right away what to do with them.  Nobody ever needed to tell me to draw something if I was bored.  I was always creating something new.  No matter how much my family or teachers had tried to talk me out of it, they just made me want to reach that goal even more aggressively.  It was like waving a red cloth in my face when people would doubt my determination.  I believe in hard work and strong discipline because luck has not much of a foothold in this field.  To put it simply:  I’m just too stubborn to give up my dream – like most of the Finns.  My mother once said to me:  “If you don’t work hard to achieve something, you will have nothing.”  I just keep on trying no matter what.

How did King Richard the Third come into the picture?

Well, it was in 1999, my parents were going through a divorce and we moved away from home with my mother.  At that time I was something like ten or eleven years old.  Basically, at that point, the world that I knew crumbled to ashes and earth trembled under my feet.  I had to adjust to my new surroundings which were very hostile to newcomers.  From Day One, it was made clear that I’d never fit into a group since I had no desire to be like the rest of my classmates.  Then on one dark autumn evening, Rowan Atkinson’s “Black Adder” was on television.  When the camera focused on King Richard the Third, portrayed by Peter Cook, it was love at first sight.  Since my father had abandoned me, a strong male figure was missing from my life.  In King Richard, all that what I missed came together:  bravery, emotional strength, loyalty, fairness, grace and above all:  understanding.  I saw him as a kindred spirit who was as much mocked and left alone as I was.

It’s amazing how so many people – all across the world – feel drawn to this young man who has been gone for over five hundred years.  Has any other historical personage affected you this way?

In my life, King Richard rules pretty much alone!  But there is room for all those people who were connected to him in one way or another. 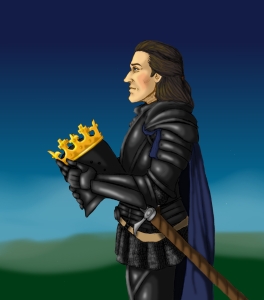 Where can we see other examples of your work (aside from Ricardian art)?

Besides that, I have made some book covers for Finnish authors as well as my own projects like some fan videos on YouTube.  Here are some links:

Can you tell us something about your art and what media you employ?

One could say that they are so-called “snapshots” from passing moments – which is very much true.  But there is something more than just that since as an artist I tend to put in some suggestive hints about my current mood.  Most of all, my work is the very oxygen to me so that I can breathe and express myself.  I like to use oil colours since they stay better under my command but if I do something smaller I will use aquarelles* since they fit better for more detailed work.  For my own entertainment, I use digital picture-making where, of course, all physical materials cease to exist.

Do you have a studio and where can we buy your work?

No, I don’t have one.  Everything is done on the kitchen table or living room writing desk.  You can buy my work by emailing me so we can make a deal!  I gladly take orders.  Here is my address:  riikka.kyllikki@gmail.com.

Thanks for taking the time to talk to us.  I think you have a great future!

*A type of watercolor.