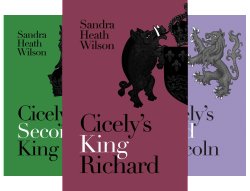 Princess Cicely (an alternative spelling of Cecily) is 16 as her love story commences in this trilogy, 18 at the end of the third book. During that time, she has cut quite a swath at the English court. Her lovers include two kings and three jacks. That is, three men named John, whom the author differentiates by calling John of Gloucester John, John de la Pole Jack, and John Welles Jon.  At the end of the third book, she has also met her last husband, Thomas Kymbe, but so far their relationship is still platonic. I’m sure he will wind up being aces with Cicely.

Cicely explains herself: “I am the way Almighty God made me.” Well, her creator (small c) has put plenty of spice in the mixture. The men in her life each have a signature scent: Richard’s is costmary, Henry’s cloves, Jack’s thyme. We are not told what Cicely’s perfume is, but it must be pretty heady. “I cannot help it that men seem to find me so desirable, but they do…” No wonder her big sister wants to hit her upside the head, and does, once. And she is not the only one. Not only that, but both men and women confide in her, and she rather wishes they wouldn’t.

Is this just a picaresque and picturesque recital of Cicely’s bedroom adventures, a bodice-ripper verging on soft porn? More than that, I think. There is a lot of action and derring-do, as well as many quieter and more poignant scenes, such as Henry VII unknowingly holding Richard’s unacknowledged son, and letting the child chew on his finger, as teething babies will.  There is witty dialogue. And there is adept characterization, although some may be controversial. Particularly that of Henry Tudor. He admits that he is “not virtuous,” but damn, he’s sexy!  Says the author: “This aspect of Henry’s character is yet more invention. He may have been a great lover, or he may have been very dull between the sheets…So, I have fashioned him as I wish. Such is the power of a writer of fiction.” Not to mention that without this invention, the trilogy would not be a trilogy.

Another way of stretching out the story (but not unduly) is having Richard III appear after he is dead. This is nothing paranormal, Ms. Wilson assures us. He is just a figment of Cicely’s imagination. “Through him she can talk of things that she already knows or thinks for herself.” Or would think, if she were using the organ intended for that purpose. At times, he can be a very real figment. He has to remind Cicely. “I am not real…I am within you….I made a mess of a lot of things. And look where it got me. In my makeshift grave at thirty-two. Please allow me down from the pedestal upon which you are so determined to place me.”

Ms. Wilson even pokes gentle fun at Ricardian hagiography in the words she puts in Lord Welles’ mouth:  “How can anyone compete with him, hmm? Young, handsome, tragic, brave, betrayed, bereaved, beloved, cultured, powerful, just, loyal, intelligent, sensitive….endowed with more attraction in his big toe than I have in my entire body…he could fight like a warrior, converse like an archangel, negotiate like a king, and dance like a courtier….He did not only wear a crown, he wore a damned halo!”

One or two small quibbles before I get to the summing-up: Henry employs a spy who is deaf (“not from birth”) and reads lips. I have reason to know that the art of lip-reading depends a lot on educated guesswork and knowing what the conversation is about, and it is increasingly difficult with greater distance. Also, how does one “kneel up?” (SHW: Regarding ‘kneeling up’. If one kneels and then sits back on one’s heels, one is kneeling, but not kneeling up. If one straightens from that position, without standing, one kneels up.)

The test of any multi-book series is, does the reader look forward to the next book? I do. In the next, Cicely’s Sovereign Secret, we will learn the identity of the woman who taught Henry Tudor the art of lovemaking. We will possibly learn the significance of Richard of York’s (Cecily’s little brother) small scar, and Edward of Warwick’s birthmark.  And although Henry tells Cicely, “I can no longer hoist anything with [Elizabeth],” they will eventually have six more children. Apparently someone was doing some hoisting. Maybe they will be reconciled in a future book. I just hope my eyes will hold out until Cicely gets to the Kymbe chapter in her life.

I always try to review books in the spirit in which they are written. Sandra Heath Wilson gives a clue to her spirit in the last line of one of the books: “Historical fiction is for entertainment; history itself is for serious study. Never mix the two.” Entertaining it most certainly is!