Richard III and the sauce bottle…. 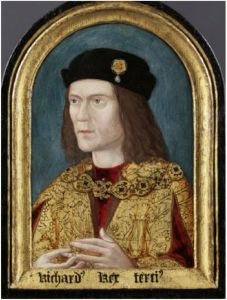 Another twiddle of a famous portrait of Richard III, this time the one held by the Society of Antiquaries. I tweaked it before, to give him a little smile rather than the scowl in the original, but now I have gone to work a little more. To me, the original portrait looks as if his right shoulder is that of a bottle of HP sauce, and both shoulders are too narrow. So I have widened them both (the shoulders of his skeleton are not narrow), added to his clothes to compensate for this, and lengthened and changed the angle of his collar. I hope he now looks better….and less like that sauce bottle.

I don’t claim to be a whiz-kid at this sort of thing, so if I’ve now given him some other flaw, I hope you’ll forgive me.

Posted by viscountessw in art and tagged portraits, Richard III

One thought on “Richard III and the sauce bottle….”