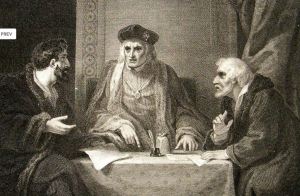 If there is one thing a lot of people know about Henry VII—apart from his dastardly defeat of Richard III at Bosworth in August 1485—it is that the latter part of his reign was a dreadful time for England. His avarice became almost oxygen to him, and he allowed his ministers to inflict truly dreadful punishments and fines upon his subjects.

The infamous Morton’s Fork was one of Henry’s weapons. John Morton was Henry’s Archbishop of Canterbury, and Chancellor, who devised a tax collecting jolly that declared a man who lived within his means had to be saving money and should therefore be able to afford high taxes. Unfortunately, the jolly also decided that if a man was living well, he was obviously rich and thus could still afford diabolical taxes. People were scuppered either way.

Supporters of Richard III loathe Morton for another reason, and that is his fiendish plotting and treachery that helped to bring Richard down. Altogether an unpleasant man, I think.

Two other names crop up constantly when it comes to Henry’s intolerable money-grubbing, and they are Edmund Dudley and Richard Empson, who are with him in the illustration above. Their names became synonymous with royal thievery and extortion, and Henry let them get on with it more or less how they pleased. And how they pleased!

However, much as they’re associated with Henry, I do not know exactly when they caught his attention as likely blood-suckers. It is suggested that Edmund Dudley appeared at his side in 1485, which would presumably be in the latter quarter of that year, after Bosworth. Unless he came over to England with Henry, having been with him in Brittany or France? That I do not know. I do know that Dudley was believed to be only about 23 when he became one of Henry’s privy councillors.

Richard Empson’s association with Henry began . . . when, I do not know. He is also in the above picture. He was older than Dudley, a lawyer, and rose to be Speaker of the House of Commons.

Both men were executed on Tower Hill on 17th August 1510, courtesy of Henry VIII. And a good job too.

If anyone knows more about how and when they became so close to Henry VII, I would love to know.