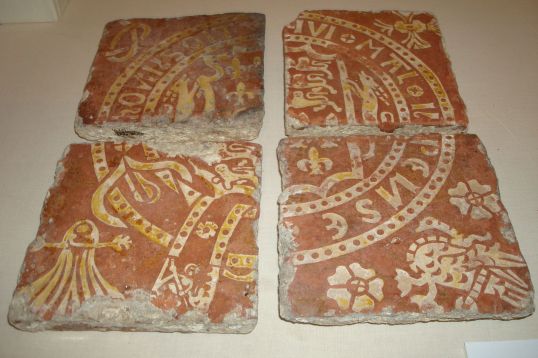 These tiles were on display at the Richard III Exhibition in Gloucester, and I think they are very interesting. Thornbury Castle ended up in the hands of Jasper Tudor, who died there, I think. Not certain, so don’t take that as a statement of irrefutable fact. As the castle is still there (it’s a hotel) I don’t know which part of it was pulled down/refurbished so that the tiles were utilised elsewhere. The following text was with the exhibit:-

These floor tiles were discovered built into a farmhouse fireplace in the Forest of Dean. It is thought they came from the part of Thornbury Castle, South Gloucestershire, built by the son of the Duke of Buckingham who supported then betrayed Richard.

The swan was a heraldic device of the de Bohun family and represents the claim of the Duke of Buckingham to be the rightful heir of the powerful de Bohuns. The flaming wheel’s axle is a reminder of the Duke’s ancestor Thomas de Woodstock, Duke of Gloucester and son of Edward III. The knot is the knot of Stafford, the Duke’s own family name. The mantle, or cloak, refers to Brecon in Wales, home of the Duke.

3 thoughts on “The Buckingham Tiles”